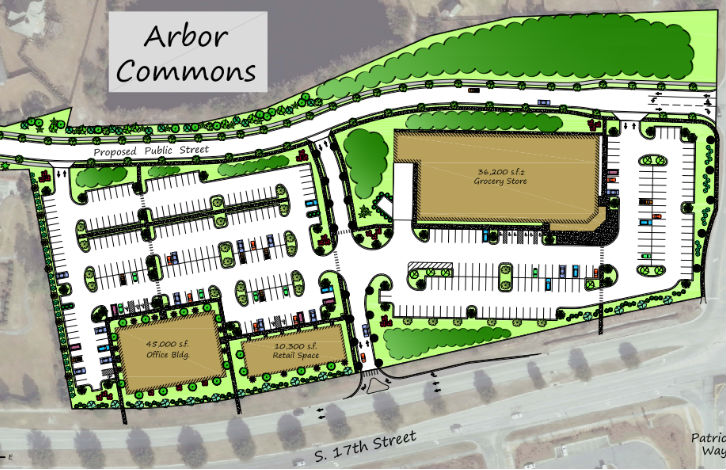 A portion of the conceptual site plan for potential commercial development Arbor Commons, which would be located off South 17th Street in Wilmington. (Image courtesy of Cindee Wolf, Design Solutions)
City officials approved a rezoning request Tuesday evening that allows a mixed-use project that includes a grocery store to move forward.

The Wilmington City Council unanimously voted to grant a rezoning request for about 12 acres of undeveloped land at 4301 South 17th St. and 807 John D. Barry Drive, a decision that gives the whole site a conditional district community business designation.

A conceptual site plan for the project, called Arbor Commons and created for developer Leon Capital Group, shows an unnamed, 36,200-square-foot grocery store, a 45,000-square-foot office building and more than 10,000 square feet of retail space in a third structure.

No one spoke against the project during a public hearing at the city council’s meeting. The city’s staff had recommended approval of the project, saying it was consistent with the city’s recently adopted Comprehensive Plan.

In a presentation to the council Tuesday, assistant planning director Ron Satterfield pointed out that the area was identified on the plan’s Growth Strategies map as an appropriate place for a mixed-use neighborhood-scale development.

Representing the applicants for the project, Cindee Wolf of Design Solutions told council members, “Grocery stores in particular of this size are certainly considered neighborhood-sized development.”

She said developers of a lot of the new residential projects currently being created in the area are embracing small neighborhood commercial centers at the entrances of those developments or nearby as a means of creating walkable communities that downplay vehicular traffic.

The International Council of Shopping Centers and Urban Land Institute define a "neighborhood center" as a place that provides for the day-to-day living needs of the immediate neighborhood, typically built around a supermarket as the primary tenant, and ranging in size from 30,000 to 100,000 square feet, according to an Architecture Week story.

Although they voted in favor of the rezoning, two council members expressed some concerns before the vote.

First explaining that he saw no reason to vote against Arbor Commons, councilman Kevin O’Grady said, “I step back and I look at the whole intersection now, and I’m concerned the Comprehensive Plan’s not working. I think we’re creating a [traffic] nightmare at this corner with all the stores.”

By “all the stores,” O’Grady was also referring to a 19,000-square-foot Aldi grocery store planned on property nearby, at 3701 S. College Road. The City Council approved a rezoning for that store in a 6-1 vote, with O’Grady voting against it, at its May 3 meeting.

Councilwoman Margaret Haynes said she respectfully disagreed with O’Grady, saying she believes it does meet the goals of the Comprehensive Plan. But she made a point related to the City Council’s 2012 denial of a rezoning request for the South 17th Street property that would have made way for a multifamily housing development for seniors.

“Wonders never cease,” Haynes said Tuesday night. “I was here ... a few years ago when there was a senior housing facility proposed for this which basically would have been hardly any traffic.  ... I personally at the time felt this was a good location for [senior housing] because of the quietness and the residential nature of it, so was very disappointed when that failed because of the protest from the neighbors. And lo and behold, I am absolutely stunned that the neighbors are OK with this wildly commercial and heavy traffic project going in here.”

But she added, “I’m going to vote for it because the neighbors are OK with it, and I personally believe that 17th Street is a very large not just connector street but almost a semi-highway over there. ... There’s going to be much more housing in that area, and this grocery store would provide the opportunity for people not to have to get out and go out on the main corridor of South College.”

The city council also Tuesday unanimously voted to waive a second reading for the rezoning request.

“Eastern Carolinas Commercial Real Estate is excited about the successful rezoning of the property ... The plan was a successful collaborative effort between seller, developer, neighbors and the city,” said Nicholas Silivanch, a commercial broker and partner in ECCRE, the firm working with Leon Capital Group on leasing and sales at Arbor Commons. “By paying attention to the concerns of the residents, the city’s Comprehensive Plan for the development of that corridor, and the goals of our client, a well thought out site plan was developed, presented and was successful for the rezoning of the property.”

He said ECCRE is moving forward with Leon Capital Group on the development of the retail and office components at Arbor Commons.

“We will be looking for tenants in the retail building as well as medical and professional office building that will be built on the site,” Silivanch said.

Construction of Arbor Commons will include the building of a public street parallel to South 17th Street connecting John D. Barry Drive and Peel Street.

The property will also be connected “to the Cross City Trail from sidewalks which shall run throughout the property, making interconnectivity a major theme for the motoring, cycling and walking traffic,” Silivanch said.