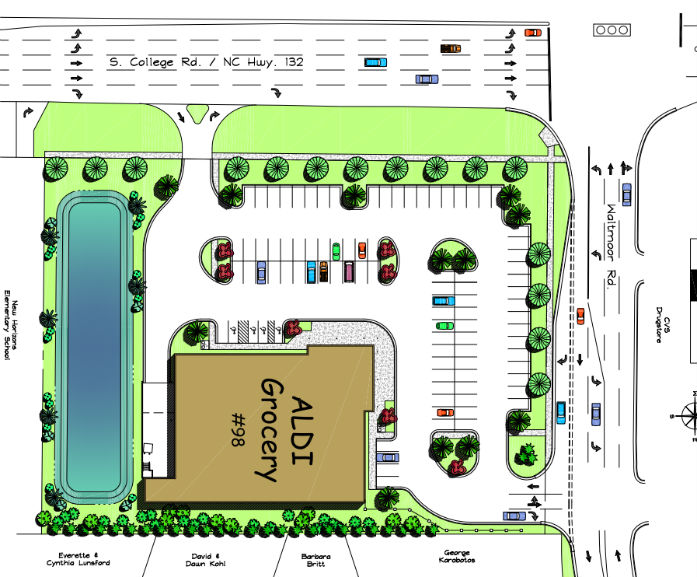 The 19,000-square-foot store would be built at 3701 S. College Road, a 4-acre site at the corner of South College and Waltmoor roads, where Trinity Reformed Presbyterian Church is currently located.

Aldi is seeking a rezoning from the city of Wilmington to change the site's designations from R-15, or residential, to a community business conditional district. The matter will be considered by the Wilmington Planning Commission at its meeting at 6 p.m. April 6 in the City Council Chambers, City Hall, 102 North 3rd St.

Jonathan Washburn, an attorney and Coldwell Banker Commercial Sun Coast Partners broker, said he is representing the church in a potential transaction involving the grocery store and is currently working to find a different, suitable site for the church to relocate.

In a narrative associated with the rezoning request, Cindee Wolf, owner of Design Solutions, said the proposed project would meet the city's Comprehensive Plan strategy  of "sensible infill where urban services are available and more efficient use of under-used property."

The small church's layout does not include standards driveway aprons, landscaping throughout the site or sidewalks, features that comply with current regulations, according to the narrative.

"Since this project is located on the East side of the major intersection, the neighborhood‐scale retail use accommodates a more . .  . reasonable transition to the established neighborhoods," farther along Waltmoor Road, the narrative said. "The installation of new sidewalks along both street frontages and the existing Cross‐City multi‐use trail on the North side of Waltmoor Road promote the safe walkability and strategic connections from the neighborhoods to the wide mixture of uses surrounding the commercial node.  Being located along a WAVE transit route also adds to the accessibility to the proposed use."

In recent months, Aldi has also looked at the possibility of building a store of nearly the same size at the corner of Ploof Road and U.S. 17 in Leland. The Cape Fear region is not the only area in the U.S. where Aldi, which currently has about 1,500 stores nationwide, wants to grow, according to a company news release issued March 8.

The firm "is in the midst of its accelerated expansion plan that, by the end of 2018, will bring fresh, high quality groceries at everyday low prices to more than 45 million customers each month. To reach its aggressive goals, ALDI will create more than 10,000 new jobs at its stores, warehouses and division offices from coast to coast and invest more than $3 billion to pay for land, facilities and equipment," the release said. "When completed, ALDI will have nearly 2,000 stores, marking a close to 50 percent increase in only five years."

Locally, other chains, including Lidl and Publix, have also been shopping for new grocery store sites in the Wilmington area. Construction on a Publix is currently under way at Bragg Drive and South College Road with an opening planned for this summer.