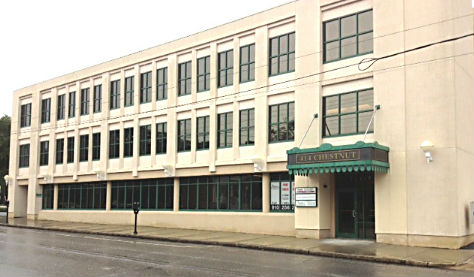 City of Wilmington officials will consider Tuesday night whether to buy the second floor of downtown office building Chestnut Commons (Photo courtesy of Eastern Carolinas Commercial Real Estate)
Facing an office shortage that has led to converting closets into work areas, city officials are considering buying part of a downtown building to provide some relief from the crunch.

If the Wilmington City Council approves the purchase of the second floor of 414 Chestnut St. for $375,000, the city’s information technology department would be relocated there, freeing space elsewhere for new employees approved in the latest budget, according to a memo from city manager Sterling Cheatham to the council.

“Currently IT staff is spread over multiple floors throughout 305 Chestnut Street. This purchase will allow for some efficiencies in IT by having all staff in one location,” the memo says.

The bank-owned second floor of the office building, Chestnut Commons, would give the city nearly 5,800 square feet of additional space. But it might not necessarily be a permanent residence for the IT department, said Richard King, deputy city manager.

“This is a short-term measure to close a gap with some new positions that are coming in this year, and we’re going to continue to look at a long-term strategy for additional office spaces downtown,” King said.

In September last year, John Sawyer Architects completed a space needs assessment for the city, looking at city offices in 305 Chestnut St. and City Hall. One example of a possible future option that the study identified was tearing down the small, one-story building the city owns at 315 Chestnut St. and constructing new space there, King said.

During its meeting at 6:30 Tuesday night at City Hall, the City Council will consider one resolution to make the purchase and another to appropriate $510,850 for the deal, a figure that includes the purchase price and an additional $132,850 for renovations and closing costs, the memo says.

The owners of Brush Dental Care, via Farrell Ventures LLC, bought the third floor of Chestnut Commons for $325,000 in March, according to a deed recorded in New Hanover County.