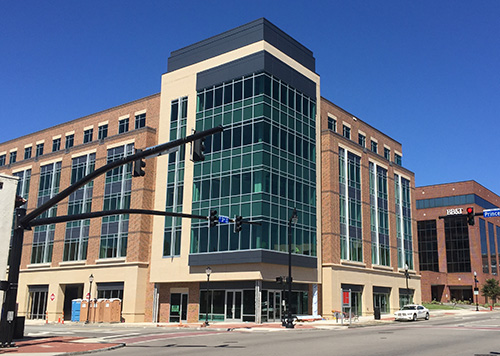 The new building at 101 N. Third St. will house BB&T and other tenants. A time-lapse video of the building’s construction is online at ghkcapefear.com. (Photo courtesy of GHK Cape Fear Development)
For nearly 50 years, businesses have chosen a site at the corner of North Third and Princess streets in downtown Wilmington to expand, to which news articles from the 1960s and ’70s and a time capsule found during the  construction of a new office building can attest.

“Putting an office in downtown can be tricky, but it’s just such a good location with proximity to parking, the [New Hanover County] Courthouse and City Hall,” said Brian Eckel, founder of Wilmington-based Cape Fear Commercial and part of the recently formed GHK Cape Fear Development.

Eckel talked about the project during a tour of the 69,000-square-foot building, where Barnhill Construction workers were putting on the finishing touches of the offices in mid-September. General contracting firm CCSI is in the process of an upfit that as of Sept. 15 was expected to be complete in eight weeks, Eckel said.

On the second floor, the building has a secure connection to an existing parking deck, Eckel pointed out during the recent tour.

Local demand for class-A office space, especially in certain locations and with modern amenities, has remained on the upswing recently, brokers say, with a lot of activity not only downtown but also in the Military Cutoff and Eastwood road corridors.

“All of our class-A office has picked up just over the past two years, really like every other sector,” Eckel said.

Eckel said Sept. 15 that he expected to announce tenants soon for 8,800 square feet on the fourth floor, leaving nearly 6,300 available, and another tenant for a 7,500-square-foot fifth-floor space.

A little more than 1,600 square feet was also available on the second floor.

With expansive views of Third Street and other parts of downtown, including the river, the new building includes marble tile and reclaimed pine from the Cape Fear River in the lobby, along with an InterActive TouchSource Directory with company and individual listings, property and building amenity information, and Google-powered real-time news, weather and traffic information.

From 1871 to 1874, the site was occupied by the College of Physicians and Surgeons, and served as a location for Waccamaw Bank for many years beginning around 1968. The cornerstone for the college was found during  demolition, Eckel said, along with the 1971 time capsule Eckel said that time capsule would be returned to a spot inside the building along with a 2015 time capsule.

“I’d say that Mayfaire’s a hot office market now,” said Cress, who along with colleague Tyler Pegg has represented tenants and landlords in a myriad of recent and past office transactions. “It’s probably the strongest commercial market and subsector of Mayfaire/Landfall commercial real estate in the Wilmington area.”

With the lease by nCino of 41,000 square feet off Military Cutoff, the property referred to as the former Wachovia building is 100 percent occupied, Cress said. In addition were leases of 2,400 square feet by Never Stop Select Services (represented by Mike Nadeau of Creative Commercial Properties) and 4,500 square feet by Coastal Speech Therapy in June.

Keith Austin, a broker with Maus, Warwick, Matthews & Co who handles a lot of retail and office transactions, said there’s still not much class-A office spaces to choose from in the Wilmington area.

“An office user is going to look at pretty much all of the available class-A space remaining, and there’s a certain few in that Military Cutoff area and then not a lot in Wilmington proper and then a good bit more in downtown Wilmington,” Austin said.

He represented the landlord in the recent lease by PharPoint Research, a contract research organization for medical clients, of 6,100 square feet in the office building at 1001 Military Cutoff Road.


New offices on the way

Glo MedSpa is doubling its current size by leasing space on the first floor of the new project, Anderson said. Ed Paul of Paul Vision Institute will occupy a second-floor corner suite.

Workers with McKinley Building Corp. broke ground on The Offices at Airlie earlier this month, and the project is on schedule for a first-quarter 2016 completion, Anderson said.

The Offices at Airlie LLC paid the owner of the land, consisting of about 1.8 acres, at the corner of Military Cutoff Road and Wrightsville Avenue, $725,000 for the property. Eastern Carolinas Commercial Real Estate represented the landowner, Vernell Green, in the transaction.

Anderson and partners are in the final design phase for new buildings in The Offices at Mayfaire, having previously completed three buildings that total more than 112,000 square feet of class-A space, Anderson said.

“We are currently in talks with several large office users ranging from 11,000 square feet to a 40,000-square-foot user,” he said.

“Having filled five of our nine 10,000-square-feet floors constructed here in Mayfaire I, II and III with entire floor users, we have created … [for] Mayfaire a class-A office market for large, contiguous footprint users.”