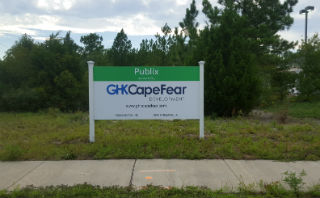 Publix signed a lease for a Bragg Drive store under development by GHK Cape Fear, the result of a merger between GHK Developments Inc. of New Orleans and Wilmington-based Cape Fear Commercial's development division. (Courtesy of GHK Cape Fear)
Editor's Note: This version is an update to include more details about the first Publix location announced by the company in Wilmington.

Rapidly expanding grocery store giant Publix Super Markets is officially coming to Wilmington, with its first announced location expected to open in late 2016 at South College Road and Bragg Drive, according to an email from the company Monday.

"We are pleased to announce that Publix Super Markets has executed a lease on a new store location in Wilmington, NC," Kim Reynolds, media and community relations manager for the company's Charlotte division, said in the email Monday afternoon.

The store at 716 Bragg Drive, referred to as "Publix at Pine Valley" in the email, will be about 45,000 square feet, Reynolds said.

"Wilmington is an area we’ve been wanting to serve, and this location happened to work really well for us," she said. "It’s a heavily residential area and allows us to build a brand new store from the ground up. We are excited to bring Publix’s premier customer service to Wilmington and look forward to earning the community’s trust as well as to being an active partner in the community."

The store's announcement also means new jobs are coming down the line. Reynolds said hiring typically takes place about a month before a store opens.

"We employ approximately 125 to 150 associates per store. Roughly more than 100 of those positions will be local hires," Reynolds said.

The Pine Valley Publix project has been brought about through the combined efforts of New Orleans-based GHK Developments Inc. and the development division of Wilmington-based Cape Fear Commercial.

"We have developed 26 Walgreens together throughout the Carolinas and have officially merged the firms. The new entity is GHK Cape Fear Development," Brian Eckel, co-founder of Cape Fear Commercial, said in an email Monday evening. "We will have a Wilmington office and a New Orleans office."

Site plans for the Bragg Drive store were released by the city of Wilmington earlier this year, with the latest revision dated July 24, according to the city’s project tracking website. The 46,031-square-foot store comes with 212 parking spaces, the latest plans say.

Publix is also expected to be the anchor tenant for Ogden Market Place, a new shopping center in the works for the corner of Market Street and Middle Sound Loop Road in Wilmington. The center developer, Halpern Enterprises Inc., hopes to make an official announcement about the anchor tenant soon and to break ground on the center in the next two to three months, a Halpern official said Aug. 6. The city of Wilmington recently annexed and zoned the land where the center is planned.

Publix, Florida’s largest private company, earned $1 billion in the first half of 2015, according to media reports Aug. 3. Its well-publicized expansion efforts in North Carolina have included 11 recently opened stores in various communities and three soon-to-be-opened locations in Concord, Cary and Winston-Salem, according to the company’s website. Publix also opened a store recently in North Myrtle Beach, South Carolina, on U.S. 17 in a location about an hour away from Wilmington.