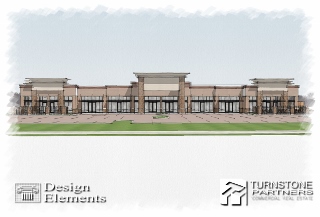 Fantastic Sams is the first tenant for New Centre Commons, a shopping center planned for space across from Target. (Rendering courtesy of Turnstone Partners Commercial Real Estate)
Hair salon franchise Fantastic Sams is expected to open its doors in the first part of 2016 at a new shopping center planned for New Centre Drive, a commercial real estate firm announced this week.

Fantastic Sams is the first tenant to sign a lease for New Centre Commons, at 4712 New Centre Drive across from Target and other national retail stores. Local investors announced earlier this year that they planned to open eight new Fantastic Sams locations in the Wilmington market, with some already open throughout the area.

“We are thrilled at Fantastic Sams’ decision to join New Centre Commons as the inaugural tenant,” said Bryan Greene, of Turnstone Partners Commercial Real Estate, in a news release. Greene represented the landlord in the lease.

“Fantastic Sams’ high quality of service and commitment to the Wilmington area make it an asset to the community, and we know it will drive a high volume of customers to the center,” Greene said.

Seven remaining units are available at New Centre Commons, including two end-caps of 3,000 square feet reserved for restaurant use with fenced patios and drive-thru lanes, the news release said. Other spaces range from 1,435 to 3,022 square feet.