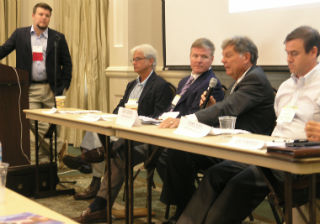 At an International Council of Shopping Centers seminar in Wilmington on Tuesday, Nicholas Silivanch (from left) posed questions to developers H.J. Brody, David Harner, David Swain, Chris Taft and Joel Tomaselli (not pictured).
Developers of large local shopping venues expect many aspects of the commercial market in the Wilmington area and in other communities along the Carolina coast to continue improving, they said Tuesday at an event that was the first of its kind for the Port City.

In years past, developers had a much harder time attracting national tenants to their projects, said David Swain, developer of The Forum shopping center on Military Cutoff Road  and CEO of Swain & Associates.

“Only seven to eight years ago did we really start seeing the fresh names start to come in – the Whole Foods, the Fresh Markets, the Trader Joe’s, the Chick-fil-As, the Panera Breads. When you see that kind of group coming to an area like this, all of the sudden, the market changes,” Swain said Tuesday morning during the International Council of Shopping Centers breakfast program organized by the group's Wilmington Next Generation Planning Committee.

Panelists for the program, held at The Terraces on Sir Tyler, included one of the developers of Mayfaire, H.J. Brody of BrodyCo. Inc.; David Harner of Paramount Development, the company that has developed a Walmart-anchored shopping center in Porters Neck; Chris Taft of Crosland South East; and Joel Tomaselli, developer of Lumina Station, in addition to Swain.

The group shared advice with a group of nearly 100 commercial brokers, developers and other professionals involved in the industry as they responded to questions about development and investment in the coastal Carolinas posed by Nicholas Silivanch, the chairman of the Wilmington Next Generation Program Planning Committee and a partner and broker with Eastern Carolinas Commercial Real Estate.

Members of the panel said low capitalization rates that emerged after the recession helped lead to the recent purchases of local shopping centers, including the most recent $192 million sale of Mayfaire Town and Community centers in June.

Mayfaire Town and Community centers generate more than $200 million in sales annually, with shop sales of $385 per square foot, according to the news release from the centers’ buyer, CBL & Associates Properites Inc., on June 18.

“Relative to these guys, I’m the smallest developer up here who just sold his largest asset because the cap rates are so strong right now,” Tomaselli said.

“You’re looking at a group of developers up here, so in a market like we have today, with cap rates at the level that they are, you’re going to find us being the sellers instead of the buyers,” Swain said. But he also said his firm still looks at properties that show the potential for redevelopment or development from the ground up, latter case only if there’s an opportunity to build on the land within a three-year term.

“If we can buy at a wholesale price and develop it within that period, we’re very pleased with it,” he said.

Wilmington is a different kind of animal when it comes to commercial real estate than nearby coastal communities that are considered tertiary markets, panelists said. So leaving Wilmington out of the equation, they said one challenges that arise when it comes to persuading some national chains to open locations in smaller coastal towns include convincing them that those locations make sense despite population fluctations and that they will be able to sustain profits over the long haul.

Swain, who explained at the beginning of the session that his company's home base is in Wilmington but much of its development projects are outside the Port City, said grocery store tenants have often underestimated their revenue projections for stores in some of North Carolina's towns. He said most of the stores his company has developed along the North Carolina coast have surpsassed those projections by 50 percent.

"Finally, they're getinning to understand that, and they're coming our way," Swain said.

Harner used a Pender County town and a South Carolina community as examples, saying that the Wal-Mart Neighborhood Market in Surf City is 30 percent above its projections and the Fresh Market in Pawley's Island, South Carolina, is in the top third of its company. What he described as "hyper-tourism" has been a major contributing factor, he said.

"You can see in some of these tertiary markets -- they can really hit home," Harner said. "And boy, when they do, they start looking for more in those areas, if you can show them that kind of tourism exists."

And the tourists and new residents keep coming to both Wilmington and smaller communities, panelists said.

"The opportunities because of the in-migration of retirees, I think, are always going to make this a growing market rather than a contracting market," Tomaselli said.