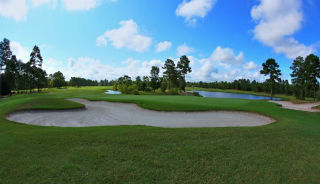 A firm organized by Bobby Harrelson, owner and developer of Compass Pointe and one of the original developers of Magnolia Greens, has the course under contract with the current owner, Magnolia Greens Ventures, for an undisclosed amount, said Rick Sears, managing partner of the firm selling the course. The deal is expected to close in a couple weeks, Sears said Monday afternoon.

Under the name Brunswick Golf Holdings, Harrelson and Sears will lead the management of the Magnolia Greens course and a golf course under construction at Compass Pointe, according to a news release. The two communities, which both have Leland addresses, are less than six miles from each other.

"I am delighted to be able to link the area's finest public golf course, Magnolia Greens, with the uniquely designed new course at Compass Pointe," Harrelson, who has been in the development business for more than 50 years, said in the release. "The two courses will complement each other in design and golf programming, and the championship layouts will ensure that northern Brunswick County will be a major golf destination for local, regional, and national golfers in the future."

Harrelson, who was also one of the developers of Magnolia Greens, said he is pleased that both courses will be managed by the same staff "that has brought such positive acclaim to the Magnolia Greens," including Sears; head professional and general manager Rick Ferrell; and superintendent Marty Walker. Tommy Jacobs, former professional golfer and Magnolia Greens Ventures partner, will serve as an honorary head pro for The Pointe Golf Club at Compass Pointe, a Rick Robbins-designed championship golf course expected to open in late fall 2015, according to the release.

Sears said the responses from residents of both communities to the announcement Monday were positive. Some Compass Pointe residents already play at Magnolia Greens, he said.