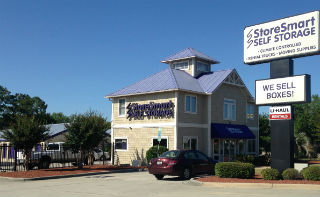 A self-storage company has bought existing properties on Market Street, including the one above, for $12 million, deeds say. (Photo by Cece Nunn)

The term “self-storage” means big business in the local market and throughout the U.S., experts say.

In Wilmington, a self-storage company based in Tennessee bought existing self-storage properties on Market Street on June 1 for $12 million, according to two deeds filed in New Hanover County.

The company, Go Store It, will re-brand the properties, located in the 9100 and 5800 blocks of Market Street, said Phil Payonk, chief investments officer at Hawthorne Residential Partners, a company based in Greensboro.

HRP shares some investors and ownership with Go Store It, but Hawthorne's apartment communities in Wilmington, of which there are at least eight listed on the company's website, are unrelated to the self-storage businesses, Payonk said.

“The plan is to re-brand them, re-market them and spend a little bit of capital to improve the assets, probably add some amenities, offer free moving trucks for tenants and hopefully just bring a little bit higher level of service to the properties,” Payonk said of the new Go Store It locations.

The seller for the Market Street properties was StoreSmart Self Storage Wilmington.

The self-storage industry in the U.S. generated $24 billion in revenues in 2014, according to an estimate from the Self Storage Association, a non-profit trade organization. The businesses also contribute $3.25 billion each year in state and local property taxes, the association says.

Other trends feed the demand, from a growing baby boomer population, some of whom are downsizing and moving into smaller homes, to apartment dwellers who lack enough space for their belongings.

The same is true of the local self-storage industry.

“The Wilmington market continues to see lots of population growth. They're finally starting to see a little bit of job growth, and we really like the U.S. 17-Market Street corridor,” Payonk said of the purchases.

In an additional sign of interest in the local market, a developer wants to build a self-storage facility along another part of Market Street, between the two intersections of Alexander Road, a proposal that would require a conditional zoning district approval from New Hanover officials, according to a recent letter to adjacent property owners sent by Cindee Wolf, owner of Design Solutions.

The letter states that an open-house style meeting is scheduled for 6 p.m. June 8 at picnic shelter No. 2, Ogden Park Drive. The proposal calls for four climate-controlled buildings and a two-story office.

“Climate-controlled has become the rage now, and I think that's why we're seeing new ones,” Wolf said of self-storage businesses.

Outside of storing boxes of items, some storage facilities are also offering RV and boat storage. One of the reasons for that, Wolf said, is that more homeowners associations have rules about parking boats and RVs in driveways. Monkey Junction Self Storage on Carolina Beach Road, for example, provides some RV and boat storage space.

For Go Store it, changes to amenities will at least include sprucing up offices and adding a coffee bar and other touches to make the businesses more appealing to customers, Payonk said.

“We want to see what our tenants demand and then react to it with improvements,” he said.