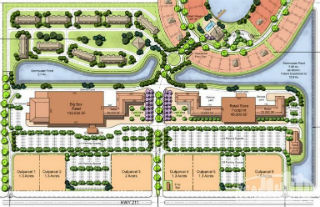 Commercial portions of the development on about 53 acres would surround an entrance road to the mixed-use project, called Marisol, on N.C. 211 near Southport, said Nicholas Silivanch, partner and broker with Eastern Carolinas Commercial Real Estate.

Mirasol developer and land owner Malcolm Jones, based in Jupiter, Florida, chose ECCRE recently to represent the project, situated on about 135 acres of land that was rezoned to allow for mixed uses during the real estate boom preceding the recession, Silivanch said.

The commercial facet of Marisol, described as a lifestyle center, includes six 1.3- to 2-acre outparcels in front of more than 288,000 square feet of retail space, with the potential for a 133,000-square-foot big box retailer, a more than 49,000-square-foot grocery store, offices and medical services, according to a conceptual site plan and marketing materials.

Among other goals, the project aims to provide residents with live, work and play opportunities, Silivanch said.

On the residential side, the conceptual plan prepared for Mirasol by Paramounte Engineering proposes 220 multi-family units on 13.8 acres in addition to 110 single-family lots.

Stormwater ponds included in the plan will allow buyers of the retail outparcels and multi-family acreage maximum use of the space, Silivanch said.

Prices on the retail portions range from $735,000 to nearly $3.4 million, according to marketing materials on Loopnet.com, while the listed price for the multi-family land is $1.98 million.

The land has been cleared and the development team is working on getting permits for the project’s main entrance and residential construction, but the site plans have not yet been submitted to Brunswick County’s planning department, said Mark Pages, land planner in the county’s planning department. A video dated Dec. 3 on the Cape Fear Virtual Tours video station website features the Mirasol land.

Last year, a Southport-based group of developers announced plans to build as many as 2,250 living units on a 2,114-acre site at the intersection of Midway Road and N.C. 211, near the Mirasol land, in a development for residents aged 55 and older called The Charles, according to a previous Greater Wilmington Business Journal article. As of last year, that plan also called for office, retail and medical space.

More recently, an unnamed developer has searched for sites elsewhere in the county, focusing on Supply at one point, for a major shopping hub, according to officials with the Brunswick County Economic Development Commission. To provide a tool that could boost retail development, the commission announced on its Facebook page April 2 that the county’s economic development foundation has hired a firm to conduct traffic counts in June over a period of three days.

“Retailers use traffic counts as one of the criteria to determine where they will build a new store. [The N.C. Department of Transportation] takes traffic counts in the winter months in Brunswick County. . . The [June] counts will include tourists and locals and will give a more realistic traffic count for us to show potential retailer developers. The counts will be taken on U.S. 17 in seven locations, one on US 74/76 and two on [N.C.] 211. The results will be made public by early July,” the announcement said.