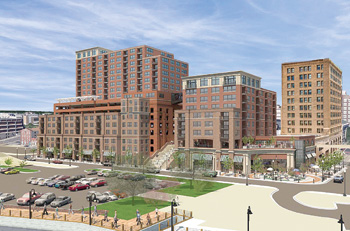 “No. 1, we’re very impressed with the overall level of activity and vision in Wilmington. It’s obviously on the move, and it’s growing in a very responsible and healthy manner,” he said. “No. 2, this is an extraordinary site. It’s probably one of the better sites you could find in North Carolina for mixed-use redevelopment.”

The third reason, he said, was that the project the city has envisioned represents East West’s core business.

A 30-year-old company, the firm’s major markets in the past have included the Research Triangle and Charlotte, according to the company’s website.

“This particular lot is in the heart of the old part of downtown. I liked the design that Cape Fear Partners submitted, but when I saw how well East West fit the heart of downtown, that made a big difference,” councilwoman Laura Padgett said.

Mayor Bill Saffo and councilman Neil Anderson voted against the measure, which names Cape Fear Partners, the development arm of local commercial real estate firm Cape Fear Commercial, as the second firm the city should negotiate with if the East West talks don’t work out.

The East West revised proposal includes 554 parking spaces and a 172-foot-tall building with more than 31,000 square feet of retail space. The plan’s 190 residential units would include 58 condominium homes, the revision says.

In the designs the company first submitted to the city, “we just didn’t think there was enough imagination and creativity,” Perry said.

He said the firm went back to some architects it has used for projects in the past, DMA Architecture and CJMW Architecture.

“The previous scheme was big city architecture,” wrote Perry in the revised submission. “It had no relevance to the Downtown Commercial Historic District. The new design corrects this error. The massing, the architectural style, the material selections, the accent detailing, and the use of signage, awnings, and storefronts are concordant with the district.”

The revised submission goes on to address how the changes might affect downtown pedestrians.
“The new design extends Bijou Park through the project, the extension widens into a retail plaza that faces the river and overlooks Water and Chestnut Streets. It creates people-friendly spaces at street level along Water and Chestnut streets to provide a link between the [Riverwalk] and downtown,” it stated.

The Bijou Park connection, including a water feature, was one of the design elements council members said they particularly liked about the East West proposal.

“Some day we’re going to have a Fourth of July celebration out there, and that staircase is going to be the grandstand,” councilman Kevin O’Grady said. “I just think it’s a great feature, and they were the only ones that came up with it.”

Between its first presentation to city council and submitting its revised proposal, East West also enlisted some local experience, hiring Susi Hamilton to become part of the team, Perry said.

Hamilton represents the 18th District (parts of New Hanover and Brunswick counties) in the state House of Representatives, and is founder and CEO of Hamilton Planning Inc., a consulting firm that offers business development services.

“I don’t think we would have been successful if we had not had Susi to guide us on the path to what it is Wilmington is looking for. We just couldn’t have learned enough that quickly on our own,” Perry said.

He said he thinks the biggest challenge moving forward with the redevelopment of the Water Street parking deck site could be “balancing the creation of the kind of place that the city wants with a project that’s also economically viable.”

The city is in the appraisal process involving the cost of the air rights for the Water Street site, referring to what would be the empty space above the project, deputy city manager Tony Caudle said. And the cost of demolishing the parking deck is another unknown factor, but, O’Grady said, it was a cost the city would have had to incur anyway.

“The good news out of all of this is we took the bull by the horns,” he said. “From the day I got here 10 years ago, people were talking about developing it. Nobody ever did anything. We’re doing it.”