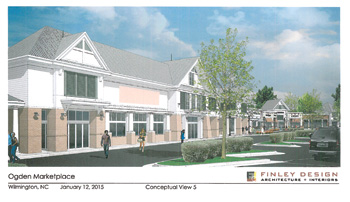 A developer recently submitted site plans and elevation renderings (like the one above) to New Hanover County for Ogden Marketplace. (Rendering c/o NHC)
Sooner rather than later, local real estate brokers and developers expect to see a dramatic transformation for one of the oldest and busiest commercial thoroughfares in the Wilmington area.

This year along northern portions of Market Street, from College Road to the Pender County line, numerous commercial projects are under way and more planned, even as local officials tackle the question of how to accommodate rapid growth throughout the region.

In years past, a lot of commercial expansion took place on Market from College to Gordon Roads, “but over the last few years, as Porters Neck has grown, you’ve seen a lot more development in the stretch from Gordon Road to Porters Neck,” said Tyler Pegg, broker with The CRESS Group of Coldwell Banker Commercial Sun Coast Partners.

Nicholas Silivanch, partner and vice president of retail for Eastern Carolinas Commercial Real Estate, said one of his clients who was touring sites on Market Street asked, “Why do you have so many small strip centers? Why aren’t there any bigger shopping centers?”

While a Wal-Mart-anchored center is under construction in Porters Neck and a project anchored by a Publix grocery store is planned in Ogden, a larger commercial project for other parts of the area is a challenge because of a scarcity of parcels of a certain size, Silivanch said.

“The main issue you face when you try and combine lots and do an assemblage – sometimes you can’t get the pricing per acre where you need it to be to make a project work,” he said.

Hill Rogers, broker in charge with Cameron Management Inc., said he has noticed an uptick in interest in one of the remaining larger tracts in the area, a 17-acre site at the corner of Bayshore Drive and Market Street listed by his firm. Zoned B2, the land has a wetland delineation, a stormwater permit and a signalized access with a traffic light.

Rogers said Publix had seriously considered the site for a Wilmington location.

“We were a finalist,” he said.

Instead, the chain is expected to open a store, though hasn’t confirmed it, at the corner of Middle Sound Loop Road and Market Street, if New Hanover County officials approve a conditional rezoning sought by Halpern Development Co.

Halpern Development had to assemble eight parcels for the 12.5-acre site where Ogden Marketplace would be built.

The company submitted site plans and elevations to the county earlier this month, and the conditional rezoning request is scheduled to be considered by the Planning Board on March 5, said Ben Andrea, current planning and zoning supervisor for the county.

Farther north, the Wal-Mart-anchored Bayshore Commons is taking shape in preparation for a summer opening. Cape Fear Seafood Company, a restaurant and bar, plans to open a second location there.

The restaurant’s owner, Evans Trawick, said, “We have a lot of customers from that side of town, from Landfall, Wrightsville Beach, even Porters Neck, but we see those customers less frequently” than those who live closer to the eatery in Myrtle Grove Shopping Center, 5226 S. College Road.

In addition to commercial development, transportation improvements are expected to play a key role in Market Street’s future. The N.C. Department of Transportation plans to begin acquiring properties along Market in April for the Military Cutoff Extension and Hampstead bypass project.

Additional roadway changes could have an impact on safety and traffic flow.

Mike Kozlosky, executive director of Wilmington Urban Area Metropolitan Planning Organization said the DOT is working on an access management plan for Market Street and looking at implementing the median recommendations made in a Market Street corridor study completed in 2011.

“I think you’re going to start to see some additional interest in the Market Street corridor from potential developers,” Kozlosky said.