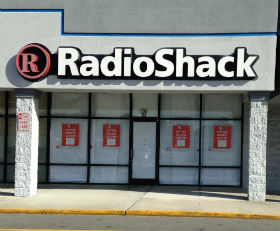 Signs at the closed RadioShack at 352 S. College Road directed customers to other Wilmington locations Tuesday morning. (Photo by Cece Nunn)
One RadioShack store in Wilmington closed its doors Sunday, a day before the New York Stock Exchange announced that it had suspended trading in RadioShack Corp.'s common stock.

The windows of the RadioShack in University Centre, 352 S. College Road, were covered with paper inside and displayed signs directing customers to the RadioShack stores at 5214 Market St. and 5120 S. College Road. Those two stores, along with the RadioShack inside Independence Mall at 3500 Oleander Drive, were open Tuesday morning. Local employees indicated Tuesday that they had not received any information about potential closings of Wilmington's three remaining stores.

“We don’t have any specific information to share at this point,” the electronic retailer’s media relations department wrote in an email responding to a question about Wilmington’s RadioShack stores.

Numerous national media outlets were reporting Tuesday afternoon that RadioShack is on the verge of bankruptcy, and some of its store leases might be bought by other companies. A Bloomberg news story, based on anonymous sources, said Monday that RadioShack plans to shut down, but Sprint Corp. might buy half of RadioShack's leases as part of a bankruptcy deal. According to its website Tuesday, RadioShack has more than 4,000 company-operated stores in the U.S. and Mexico.

The NYSE said in a release Monday that it plans to delist the company's common stock and had suspended trading because RadioShack “does not intend to submit a business plan to address its noncompliance with the NYSE’s continued listing standard.”