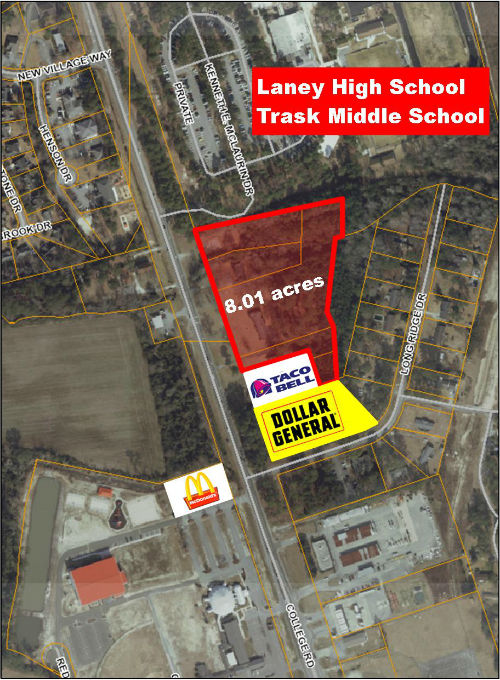 Jack D. Kilbourne, a broker with Wilmington-based Maus Warwick Matthews & Company, said Monday that because commercial interest in the property has increased significantly, its land owners have placed the balance of the 9-acre site on the market for sale.

The remaining 8.04-acre property is listed for sale at $1.5 million.

Wilmington-based developer Adam Sosne originally purchased the site in December 2012 to construct a mixed-use development on the multi-parcel property.

Original plans called for three existing structures to be demolished and a $12 million, 102-unit apartment community to take its place.  The proposed development would also include six to eight small ground retail units and an outparcel tract for a future office development or fast-food restaurant.

But Kilbourne said the recent momentum of commercial activity, including a new Taco Bell currently under construction on a 1-acre parcel on the property, has prompted Sosne and his firm to adjust their original plans for the site and place the land on the market.

The area, which has limited commercial development despite its fast growth, is quickly becoming a hotbed for new retail activity and growth.

Prior to Taco Bell’s construction, a 4,300-square-foot McDonald’s recently opened along the corridor, followed by a Dollar General.

“The owners are keeping their options open,” Kilbourne said, adding that the mixed-use development could still be an option if a buyer purchases the property. “We have been approached by a number of quick-service restaurants, as well as a couple of retail developers.”

Located at 2600 N. College Road, the remaining 8.04-acre site sits directly south of the Northchase community’s entrance and the Trask Middle School and Laney High School complex – garnering some of the highest and fastest-growing traffic counts in New Hanover County.

The area also continues to see swift residential homes sales and healthy apartment occupancy rates and growth, including a 48-unit apartment addition currently under construction within the New Providence Park development that’s located less than mile from the site.

Kilbourne said 2.10 acres adjacent to Taco Bell is zoned B-2 commercial, which allows for fast-food restaurants, banks and pharmacy uses, according to New Hanover County planning officials. He said the remaining property is zoned R-15 residential.

The site also includes a 1.92-acre storm water facility that is under construction to serve the entire site. The required N.C. Department of Transportation improvements will be made prior to closing and are included in the price.