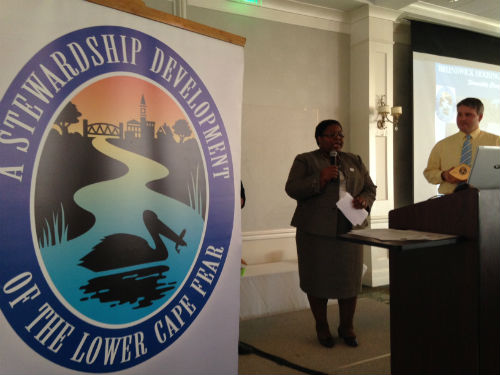 Environmental builders, architects and planners praised Wilmington-based Live Oak Bank’s recent headquarters development and construction as being one of the greenest projects completed in the region.

Members of the Lower Cape Fear Stewardship Development Coalition awarded the fast-growing bank its Outstanding Stewardship Award during its 2014 development awards banquet Wednesday afternoon at the Terraces on Sir Tyler.

The group and event honored development projects that demonstrate outstanding environmental stewardship through the protection, conservation, improvement and awareness of the region’s natural resources through a judging process.

Officials recently broke ground on phase two of the bank’s corporate footprint – a 55,140-square-foot building that will house its nCino division on a neighboring 10.66-acre parcel in the Tiburon Office Park development.

“Great lengths were taken to preserve trees and the natural features of the site and to maximize the view connection from the offices and workspaces to the exterior courtyard and grove of live oak trees,” Ralston said.

Ralston said other noteworthy environmental design elements incorporated in the building’s construction include interior glass walls that allow for transparency and views from any point within the building, pervious concrete colored to match pine straw for the parking spaces and river rock that catches rainwater from the roof and filters it back into the ground. She added the building’s slender office wings were also oriented for optimal daylighting and passive solar design so light fixtures do not need to be turned on during the day.

“It was a great vision for a great cause,” Boney said.

Leonidas Jack, a 6 ½-year-old, also received the Stewardship Champion Award for donating his birthday money to help replant Venus' flytraps that were stolen from the Stanley Rehder Carnivorous Plant Park.