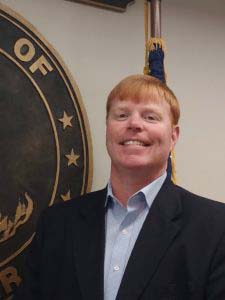 McEwen has accepted a new role elsewhere but said Thursday he was not yet ready to disclose where or whether it was for the public or private sector. He did say the role would not require him to move from his home in Hampstead.

“I’ve enjoyed my time with the county. We’ve seen a lot of great projects … we’ve had a lot of growth, a lot of economic development projects … I’m honored to have been a part of that,” he said.

A UNCW alumnus, McEwen worked for the town of Burgaw for 13 years, he said, before joining Pender County as an assistant county manager in September 2017. Upon the resignation of former county manager Randell Woodruff, McEwen was promoted to the top spot in October 2019.

Commissioner Jackie Newton said the board was not given the opportunity to counter whatever offer McEwen had received, as he told them he had already accepted it, she said. He informed the board of his decision as the last item covered during a closed session discussion that lasted nearly two hours Tuesday.

McEwen requested a 30-day notice to resign, which the commissioners rejected, and instead asked him to work out the entire 60 days required by his contract, according to a county news release. Piepmeyer said his primary concern was ensuring the county’s budget was formulated properly and without disruption, as the county is in the midst of its annual budgetary season.

The search is already underway for a new manager. “We’re going to be looking for a mature, seasoned county manager that can buckle on his seatbelt and hang onto this potential growth,” Newton said. ​