By Staff Reports, posted Jan 11, 2022
Tweet
Cape Fear Collective (CFC) will be under new leadership with the announcement of a promotion and new hire, according to a press release Tuesday.

Meaghan Dennison (pictured left) has been named interim CEO and Wesley Myrick will join the social impact nonprofit as chief financial officer. The organization’s board of directors will officially name the new roles at its February meeting.

The organization’s founder and current CEO Patrick Brien will continue to work with Cape Fear Collective as an advisor and will also take on a strategy role with DoorDash’s social impact and inclusive economy programming, according to the release.

“In its fourth year of operation, through an immense amount of community support and collaboration, CFC is in the strongest position it has ever been,” Lydia Newman, chair of CFC’s Board and executive vice president and chief administrative officer of Community Care of North Carolina, said in the press release. “We have immense clarity around the operational roadmap ahead and with the addition of several new hires, I’m excited to see this model really scale.”

Dennison was one of the first hires at CFC when the organization launched in 2019. As the director of programs, she oversaw programming and managed relationships with stakeholders. She also led the hiring and onboarding of a team that would support Community Care of Lower Cape Fear by implementing the Health Opportunities Network Pilot (HOP).

“It is an honor to lead the CFC team in our work alongside nonprofit partners and community leaders,” Dennison said in the release. “I am excited to carry forward our mission of supporting equity and opportunity to the Cape Fear region.”

Kate Groat, CFC board vice chair and director of philanthropy at Live Oak Bank, said in the release that Dennison was the perfect choice to lead CFC.

“She understands the issues and inequities in the region through her work with HOP and has demonstrated an ability to not only lead, but bring communities together,” Groat said. “This move was a natural step for the organization.” 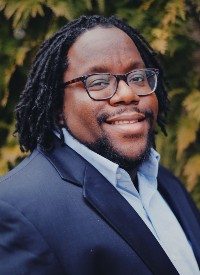 Myrick (pictured right) comes to his new role with nearly 20 years of experience in nonprofit finance and operations having worked as CFO at One 2 One Educational Support and Welcoming America, both nonprofits in Atlanta.

“Myrick was recognized by the Georgia Center for Nonprofits as one of the state’s top 30 nonprofit leaders,” the release stated.

“CFCs approach to community stability is rooted in data and it's a standard that I think we can all aspire to no matter what profession,” Myrick said in the release. “I hope to help the organization grow and thrive. What that means exactly will rest in large part with the communities we serve as well as in what the data tells us about perspective communities.”

CFC collaborates with partners to use data science and analytics to create insights that expose and work towards addressing inequalities. Brien launched the organization with the support of Live Oak Bank.
The organization has launched Collective Ventures, a social investment initiative to address affordable housing and workforce development, created reports including the Inclusive Economy Report and Healthy NC 2030 coming out this year, among other efforts.

“Having the opportunity to launch CFC has been one of the greatest and most humbling experiences of my life,” Brien said. “It has been an absolute honor to have worked alongside so many organizations, community members, and advocates to eliminate disparities in our region and beyond. I have full faith and confidence in this team and I’m looking forward to working alongside them in this new chapter of the organization.”