With Events Still On Hold, Nonprofits Move To Virtual Fundraisers 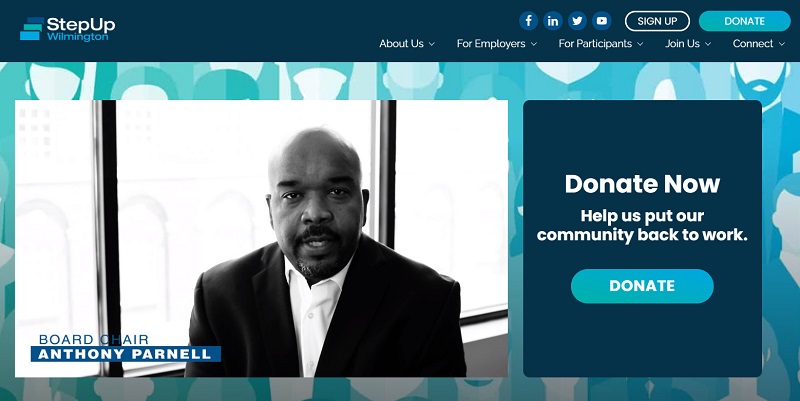 StepUp Wilmington board chair Anthony Parnell speaks in a video that encouraged viewers to donate in the nonprofit's June online fundraising event. (Image from stepupwilmington.org)
The shift from in-person to virtual fundraising events for several area nonprofit organizations is bringing in much-needed cash in light of the increasing demand for services during the COVID-19 pandemic.

At least one area nonprofit not only met but exceeded its fundraising goal in a virtual event this summer.

The fundraiser was held via email and online because the nonprofit had to cancel its annual spring luncheon. Its online fundraiser also included a video with speakers to explain its mission and cause.

The nonprofit helps individuals find jobs with a fair wage and maintains relationships with those it serves by providing support and training to help provide individual and family stability, according to the group.

“I see virtual events as a way to replace traditional in-person fundraising events that many nonprofits rely on for revenue. They also offer us a way to stay connected with our donors during this unusual time and communicate the stories of those we serve,” Leighton said.

Last year, the Stand With Us luncheon brought 550 people to the Hotel Ballast in downtown Wilmington.

But this year, in an effort to slow the spread of the coronavirus, statewide restrictions remain in place on large gatherings.

“So we had to figure out what we were going to do because that's a significant source of revenue for our organization," Leighton said.

"Certainly, the virtual event through the website was an opportunity to still capture the essence of that event in terms of format … So, for us, we weren't sure if we would be able to reach that goal, and we're really excited to exceed it,” she added.

The nonprofit will need to continue to fundraise, however, to meet its increased demand for its services, Leighton said.

Even without the coronavirus crisis, the virtual event also allowed StepUp Wilmington to reach more people, many of whom might not have been able to attend an in-person event because of a conflict or because they live outside the area, said Leighton, who is also board chair of the Association of Fundraising Professionals' Cape Fear region chapter.

“I talk to a lot of my colleagues about what’s going on, and I think virtual events are really replacing those in-person across the board because many nonprofits have multiple in-person events, whether it be a golf tournament, a luncheon, a gala; you just can’t do any of that right now. So virtual events have really become the hot topic,” Leighton said. “And I have heard from other colleagues across the community that they've had success as well, which is great.”

The Good Shepherd Center recently hosted an online auction and virtual fundraiser because its annual fundraiser, its 17th annual golf, tennis, games day and pickleball tournament, previously scheduled for July 27 at the Country Club of Landfall, was canceled due to the pandemic.

It's the organization's biggest fundraiser of the year, said Katrina Knight, executive director of the Good Shepherd Center, which is a provider of homeless services, including shelter and food in the region.

“Initially, like so many others, we were reluctant to postpone or cancel. But it became more and more evident into March and by late March, we just were not going to be able to safely host the event. And so we had hoped to simply postpone it, but then again like so many nonprofits when the community health crisis did not resolve in a matter of weeks, a reality set in that we were going to have to cancel altogether," Knight said.

To recoup some of those losses, Good Shepherd continued with the event auction as an online activity. The virtual auction ended Monday, raising $30,000, exceeding the nonprofit’s $20,000 fundraising goal, Knight said.

"The auction piece of the fundraiser was one that they could still have and safely get information and photos out to supporters and offer a safe way to support Good Shepherd," she said.

But the organization still raised additional funding it needed, even though the event did not take place in its entirety.

"Many of our sponsors have graciously committed to keep their support, and we did not have to refund it. It's amazing and allows us to put those unrestricted funds behind our different program needs," Knight said, adding that some of those who registered for the event also decided to let the nonprofit keep fees with no refund.

But while the organization exceeded its online auction goal, Good Shepherd did take a hit from not having the event in its entirety.

The goal was to raise $200,000 from the whole array of activities, including the auction, but the online efforts raised $160,000 total, Knight said.

Still, she said, "It's quite humbling to ... receive that call or open the mail and get this sweet little note about how their hearts go out to us and they appreciate that we're still open and operating and here for folks who, on top of everything else going on in their lives and having lost their housing, are now in the midst of a worldwide pandemic along with the rest of us."

Other events were also canceled in the midst of the pandemic this spring, Knight said, and two more slated for the fall are still up in the air.

"This isn't like a hurricane, where recovery begins day one ... with no end in sight and no clear sense how long we have to weather this. It's difficult to plan, it's difficult to strategize, it's hard to know if you're financially okay today, where you will be three months from now, where will you be by the end of the calendar year," Knight said. "I think for nonprofits of all sizes it's difficult to point to another time when we have faced so much uncertainty."

Hope Abounds Cancer Network had to cancel five in-person events this year, including The Legacy of Hope Brunch, its annual board of director’s luncheon, said Elizabeth Barnes, co-founder and executive director of the local nonprofit organization that serves cancer patients during their treatment.

The nonprofit instead launched this event online last weekend as the Legacy of Hope Virtual Fundraiser, with a goal to raise $50,000 by Aug. 8. That funding would be a fourth of the $200,000 operation budget the organization raises yearly.

The nonprofit has received assistance through the federal government’s COVID-19 stimulus package, she said. Hitting the $50,000 fundraising goal would take the organization through the rest of the year.

The nonprofit organization serves up to 600 men, women and children each year with cancer, and their families, through different programs. Hope Abounds has 80% of what the nonprofit raises each year go towards its programming to continue to serve cancer patients’ physical, mental, emotional and spiritual needs.

“We felt we needed to get out there and do what we can. It’s a lifeline at this point," Barnes said. "My hope and desire is that [the online Legacy of Hope event] is going to be extremely successful because it helps others that normally would have liked to have participated."

The virtual fundraiser also helps to alleviate some of the expenses of hosting in-person events as well, she said, adding “it’s more of a 100% donation, instead of having fundraising costs.”