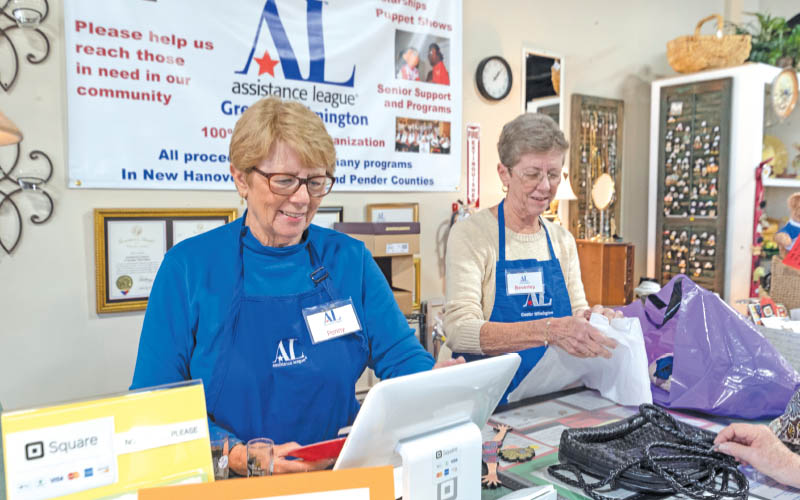 A former nurse works at the cash register, a former businesswoman is interacting with customers and a previous elementary school teacher is stocking products and sorting clothes in the back.

The 150 women who operate the local chapter of the Assistance League are volunteers, and the majority are retired.

“I got into it because I knew we were helping children,” said Betsy Suman, president of the Assistance League of Greater Wilmington board. “I joined before we had a thrift store, and a lot of people join now because they like to work in our store.”

According to data from a Health and Retirement Study by the Urban Institute, more than 6 out of 10 adults age 55 and older engage in some volunteer activity in the U.S. The sizeable number of volunteering retirees can be seen in the Wilmington region.

The local Assistance League is a nonprofit that raises money, mainly through its thrift store, and uses it to provide items, grants and services to students, educators and seniors.

Since its start in 2012, the organization has donated over $1 million to the community.

Those donations are through programs such as Operation School Bell, which distributes backpacks, uniforms, hygiene kits and school supplies to 1,500 kids each year. The nonprofit also runs Links to Learning, funding educators’ programs, and Operation Seniors, which offers services and activities for local seniors, among other programs.

Nancy Rudary, thrift shop manager and former teacher, said many of the retired volunteers at the organization were motivated to continue working.

“Most of us, we’re just not done yet. We don’t want to work full time anymore, but we want to do something,” Rudary said. “It’s very social for us as well. But we also like the fact that we’re helping make a difference.”

Norma King, vice president of resource development at the nonprofit, said she joined now that she has more time to give.

“I had run a business of my own up in Maryland and had always wanted to give back to the community that has supported my business,” King said. “I never really had a lot of time then because of running the business.”

Both Rudary and Suman joined the group early on when the organization worked towards opening its store.

“About two years before we actually opened the shop, we talked to the members to make sure that it would be supported,” Rudary said. “We visited every thrift store in the Wilmington area to see what was out there and what the need would be and drew up a business plan.”

One thing that attracts volunteers to the local Assistance League is the versatility the organization provides, they said.

Roles at the organization include shopping and delivering items for kids, buyers and pricers at the thrift store, puppeteers and ukulele players for its programs, as well as schedulers and board roles, among others.

“I think it’s attractive to retirees too as they learn more about the organization that they have a menu of different areas they can work in,” King said. “And you don’t have to get stuck in just one area. You can shake it up and do whatever you want.”

Another Assistance League member also decided to volunteer to give back to the community.

Nancy Scott-Finan, chairwoman of the league’s Links to Learning committee, is also part of the Women’s Impact Network, on the board at Cape Fear Literacy Council and Coastal Horizons Center Inc. and a volunteer at the American Heart Association.

She used to be a special assistant in the U.S. Department of Justice, which means she is used to balancing a busy schedule.

“I had a pretty hectic work schedule where I had to be at work from early to late,” Scott-Finan said. “So I’ve just sort of channeled this as if it were still a job for me. I try to schedule my meetings around doing social things.”

Education, heart health and the opioid crisis are issues that Scott-Finan wanted to devote her time to, she said, and groups rely on people like her.

“I know that some of the organizations count on having retired people in the community step up and volunteer,” she said. “There are so many retired folks who are volunteering as tutors and in other ways for the Literacy Council because they’ve got a small staff. I think that some of the nonprofits in this area are very dependent on the retirees who move in and have time to give back.”

“Most of the programs we currently have can be expanded,” King said. “As we are able to raise more money, we can expand those programs substantially.”

The 100% volunteer-run, all-women organization gives back 70% of its profit to the community while providing a space for retirees to give back and meet others with the same goals.

“Between raising families and doing careers, it’s really hard to give any kind of amount of time to volunteer back,” King said. “So it hit me when I came here and volunteered that all the women that I’ve gotten to know and everybody in the organization were the same way; they were looking to give back too.”