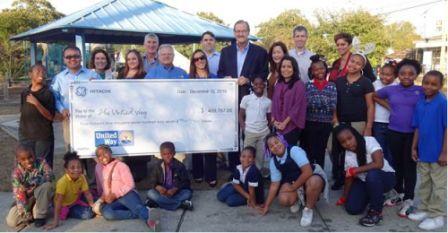 “Through giving, volunteering and leadership, GE employee support of the United Way of the Cape Fear Area is improving lives and communities,” said Jay Wileman, president and CEO of GEH, in a news release. “Many of our employees are lifelong residents of the area and believe in the importance of supporting the pillars of the United Way mission to improve education, financial stability and health.”

Historically, GE has always been a strong supporter of the United Way in this region.

“GE is the largest by far,” said United Way of the Cape Fear Area president Chris Nelson. “They have always been very strong supporters.”

Contributions by GE Wilmington employees represent about 20 percent of the funds raised during the United Way of the Cape Fear Area’s annual campaign. In addition to payroll pledges, GE employees raised money by participating in a golf tournament, car show and parking spot auction.

Nelson said all of the larger companies in the area have been consistently supportive of the organization, which this year is celebrating its 75th anniversary.

“Duke has always been generous with us, as has Corning,” Nelson said. He doesn’t have the final figures for this year’s support from those companies.

The United Way president, who will retire in 2017, also mentioned PPD and New Hanover Regional Medical Center as substantial supporters of the organization.

“We feel great about the campaign,” he added.