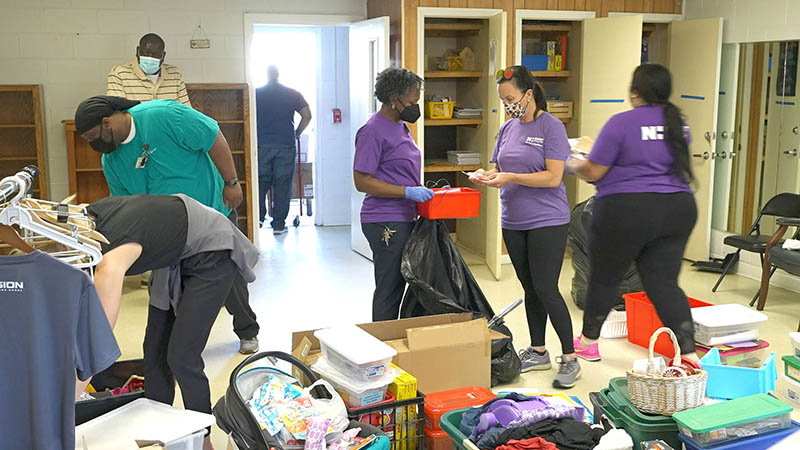 Hospital employees helped clean up Creekwood neighborhood’s community center, which had closed during the COVID-19 pandemic. The project was one of several community projects NHRMC has undertaken recently. (Photo c/o NHRMC)
As part of its acquisition by Novant Health, NHRMC is putting together an advisory council made up of community members from the tri-county area.

The Coastal Region Community Engagement Advisory Council is expected to have 25-30 members. The group will have individuals from the community as well as leaders from New Hanover Regional Medical Center, Novant Health Brunswick Medical Center and Pender Memorial Hospital.

The group, Whisnant said, is intended to “help guide us on how we interact with the community.”

“We will tell the community, through these representatives, ‘Here’s what we’re doing; here’s where we plan on going,’” he said, adding that the group will pull from a mix of fields such as housing, education and business; reflect diversity in membership; and include people from the three counties.

“It was one of the advancements that Novant brought when they came here. They do this in their other markets,” Whisnant said, adding that officials currently are on a – largely virtual – listening tour with area residents to get feedback on what they want to see from the health system and gaps that might exist.

“Novant has shown this first 100 [-plus] days … they’re very committed to community feedback,” he said.

Other community outreach projects since the deal closed included a clean-up at Creekwood Community Center, which closed temporarily during the COVID-19 pandemic. The project (shown above) entailed minor repairs to the building and boosting Wi-Fi access.

“That’s an example of the kind of thing I think the community will get used to Novant doing,” Whisnant said.

NHRMC and Novant officials recently highlighted other changes underway during the first 100 days since the sale’s close.

• Those include more students at the UNC School of Medicine’s Wilmington Campus. As part of Novant’s deal, the health system made an agreement with UNC Health and UNC School of Medicine to expand their longtime presence at NHRMC. The campus is expected by 2026 to host groups of 30 medical students.

“Since joining Novant Health, NHRMC recently welcomed 16 new students to its UNC School of Medicine’s Wilmington Campus. This is the largest cohort of students we have hosted since becoming a branch campus,” a recent news release stated. “Novant Health looks forward to continuing to expand the program to train more physicians in the future.”

• Novant Health previously announced a $10 million gift from Michael Jordan to open two medical clinics in New Hanover County. The locations for those clinics, intended to bring services to those who are uninsured or underinsured, have not yet been announced, but are expected to be in the coming weeks, officials said.

• NHRMC adopted the Novant Health financial assistance policy, increasing qualification for a full writeoff from 200% to 300% of the federal poverty level. That policy translates into an uninsured family of four with an annual income of $78,600 or less not receiving a medical bill. Another billing change, however, also has been the phasing out of NHRMC’s previous prompt-pay discount the hospital previously offered.