New Jobs, Investment On The Way To Commerce Park 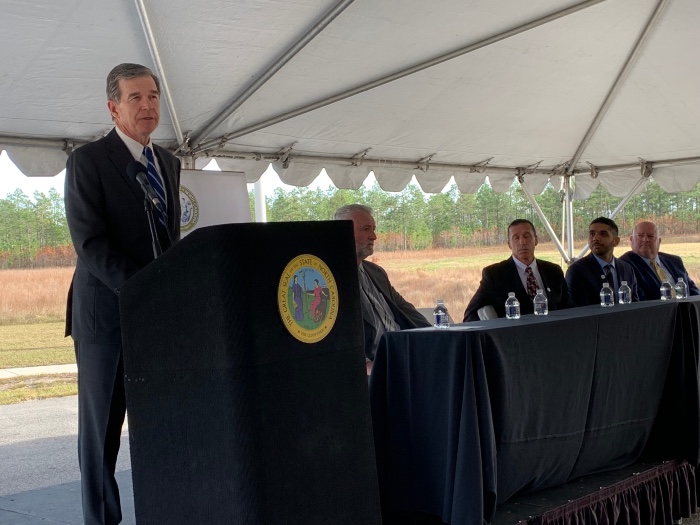 A company based in India is bringing 51 new jobs and nearly $8 million in investment to Pender Commerce Park, Gov. Roy Cooper and local officials announced Tuesday.

Hose manufacturer Polyhose Inc. is establishing its North American headquarters in the park, planning to open a 40,000-square-foot facility that will include assembly and distribution, Jonathan Pressler, senior vice president of Polyhose Inc., said Tuesday.

"In the future, hose manufacturing is the plan. So we really plan on further expansion here after we get started," Pressler said.

The Polyhose official said the firm hopes the facility will be operational by the fourth quarter of next year. In a couple of years, he said, plans are to add an additional 60,000 square feet to the commerce park operation.

Polyhose manufactures thermoplastic, hydraulic, PTFE and industrial hoses and tubings for large equipment companies such as Caterpillar, Boeing, Graco, and Wagner SprayTech, according to the release. It has operations in North America, Europe, the Middle East and Southeast Asia. The firm has 1,800 employees globally.

Pressler said the Wilmington area met all the checkmarks for the firm's plans, including the area's workforce. The company only has one other small facility in the U.S., in New Jersey, which was obtained through acquisition, Pressler said.

"We are committed to a great workforce here in North Carolina, and here in Southeastern North Carolina," Cooper said during his announcement Tuesday. "They need skilled people and we need to commit to Polyhose today that we're going to invest in education from cradle to career to make sure that they have the kind of employees that they need."

The average wage for employees could reach up to more than $38,200, stated the release, adding that ​wages will vary depending on the position. The current average annual wage in Pender County is about $32,600.

“Polyhose is thrilled to be making its first significant USA investment in Pender County, North Carolina,” Pressler said in a news release from the governor's office. “As Polyhose searched for a home in the U.S., the state of North Carolina and Pender County did a great job of working with Polyhose to find a suitable location, while pointing out the many advantages of locating here. Polyhose looks forward to being an involved employer and positive contributor to the Pender County and North Carolina communities."

A performance-based grant of $75,000 from the One North Carolina Fund will help Polyhose's operation in Pender County. The grant requires a match from local governments and are awarded when a firm meets its targets for job creation and capital investment.

Pender County commissioners gave the nod in August to sell 9 acres of the county-owned park to the firm, hose manufacturer Polyhose Inc., for $410,000.

Another company, Morbix LLC, was also given commissioners' approval in August to purchase 12.2 acres at the industrial park for $634,400.

Morbix submitted site plans to Pender County's planning department in late October for a 126,000-square-foot industrial building. The company's due diligence phase on the site will be up in mid-December with a scheduled closing sometime in mid-January, Morbix owner Chris Ramm said. He did not share additional details about the firm or what it plans to do with the site.

Pender Commerce Park, whose existing tenants include Acme, FedEx Freight and Empire Distributors was completed as part of a partnership between Pender County and WBD in 2011.

The last time Cooper visited the area for an economic development announcement was in April when manufacturer Pacon said it was converting a long-shuttered facility in Brunswick County to move its operations down from New Jersey and create nearly 300 jobs.