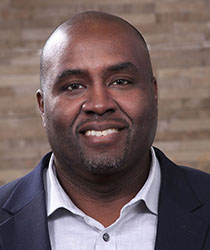 The New Hanover Community Endowment Inc. has announced its inaugural president and CEO after a monthslong search.

William Buster will serve as the endowment’s CEO beginning March 1. He is currently the Asheville-based Dogwood Health Trust’s senior vice president of impact.

Officially christened in February 2021, the endowment was bestowed $1.24 billion in sale proceeds, the bulk of the acquisition cost paid by Novant Health to purchase the previously county-owned New Hanover Regional Medical Center.

Endowment members said last month the board would rely on their CEO to steer the direction of the nonprofit as it navigates the health legacy “unicorn,” one of the largest per capita in the country.

This year, Buster will oversee major milestones during the endowment's infancy: hiring a core team, cementing grantmaking criteria, and ushering out the first grants, infusing the community with potentially tens of millions of philanthropic dollars.

He will be the endowment’s second employee; an administrative role was filled last year. As CEO, Buster will be tasked with determining the depth and scope of staff necessary to run the nonprofit, a process he said he hopes to complete by the end of the year.

Notably, many aspects of the Dogwood Health Trust mirror the New Hanover Community Endowment. Dogwood Health Trust arose out of the sale of Asheville Mission Health to HCA Healthcare and manages $1.5 billion in sale proceeds. The sale closed in February 2019; local stakeholders have kept a close watch on Dogwood’s progress, as it’s two years ahead of New Hanover’s. Dogwood oversees an 18-county service area in Western North Carolina, whereas the New Hanover Community Endowment must keep its charitable contributions within county lines.

With an entire career spent in philanthropy, Buster said he had been paying close attention to the NHRMC sale and legacy foundation. "This is a big deal," he said. "There was no way I that couldn't apply for this opportunity."

The board’s CEO search committee mined through hundreds of potential prospects with the assistance of BoardWalk Consulting before arriving at Buster. Although the committee reviewed many qualified candidates, the 13-member board was holding out for an individual with the right set of intangible assets ready to take on the complex task of addressing the region’s stratified realities, officials said.

At Dogwood, Buster oversees the nonprofit’s commitment to diversity and its grantmaking and program-related investment strategies, according to an endowment press release. The health legacy foundation held over 30 listening sessions in Western North Carolina last year, he said. Seeking constant input from the community and maintaining transparency will be his top priorities serving the New Hanover endowment. "We’re going to do even more listening," he said.

Buster earned his bachelor’s from N.C. Agricultural & Technical University, a master’s in policy and practice of development from the University of New Hampshire and an executive education certificate in mastering negotiation from the Harvard Kennedy School of Government.

Before joining Dogwood Health Trust, Buster was the executive vice president of community investments at St. David’s Health Foundation in Austin, Texas, according to his Dogwood biography. He spent nine years working for the W.K. Kellogg Foundation and previously owned a consulting firm, Common-Unity Philanthropic and Nonprofit Advisors. Raised in Kannapolis, North Carolina, Buster said he was grateful to continue serving in his home state.

“Ultimately my desire and my family’s desire has always been to come back home … to North Carolina,” he said. “It’s been kind of full circle for me.”

He said he sees philanthropy as a catalyst and convener for communities – not the end-all solution to every problem. "Philanthropy can sometimes be a black box," he said. "I want to be the type of organization that lets people know what's happening on the inside."

Each year, the endowment has the potential to access up to 4% of its total market value, per the bylaws set up by New Hanover County. The total principal was $1.296 billion as of Nov. 11. Assuming the endowment continues to grow, the board has the power to access up to at least $51.8 million when it is prepared to start issuing grants.

A 15-member community advisory committee will soon be formed and will be tasked with considering listening session feedback before forwarding draft grantmaking criteria to the board. Nominations for this board have not yet begun, but will likely open in the coming months, Gage said.

The board plans to approve grantmaking criteria by July and accept grant applications by September, according to its tentative timeline.

Watch the full WilmingtonBiz Talk interview with William Buster on the Business Journal’s Facebook page that originally aired at 3 p.m. Tuesday, Jan. 4. Catch up on the conversation later on our podcast.