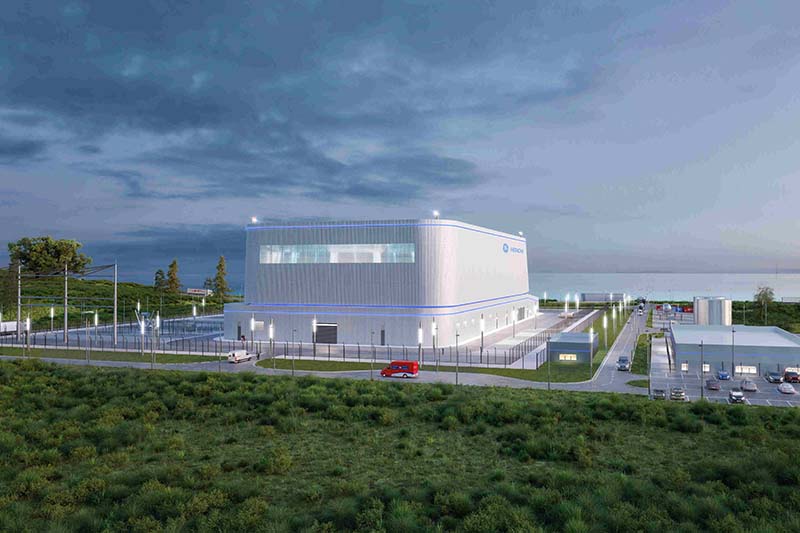 GE Hitachi's BWRX-300 design is shown in the above rendering. The small modular reactor design presents a more cost- and energy-efficient plant compared to today's existing fleet of reactors. (Photo courtesy of GE Hitachi)
GE Hitachi Nuclear Energy has submitted a design application for its BWRX-300 small modular reactor (SMR) to the U.K. Department for Business, Energy and Industrial Strategy.

The company, headquartered in Wilmington, has been working toward the goal of deploying its BWRX-300 design, which is based on its legacy boiling water reactor models. As GE Hitachi’s first SMR, the design uses fewer materials than older reactors in operation today and will be more cost- and energy-efficient.

“We believe the BWRX-300 is the ideal technology to help the U.K. meet its decarbonization and energy security goals,” said Sean Sexstone, GE Hitachi’s executive vice president of advanced nuclear. “Regulatory agencies in Canada and the U.S. are collaborating on their licensing review of the BWRX-300. Through the GDA process we look forward to engaging U.K. regulators and enabling collaboration with their global counterparts.”

The U.K. has a goal of reaching 24 gigawatts of nuclear generation capacity by 2050, according to the GE Hitachi release. Today, the country relies on about 6.5 gigawatts of nuclear power, according to the World Nuclear Association. “GEH believes that a fleet of BWRX-300 SMRs could play a substantial role in the U.K. meeting decarbonization and energy security goals,” GE Hitachi shared in its release.

The company has agreements signed with various organizations and governments that intend to construct the design.

The Tennessee Valley Authority recently applied for the licensing to build the design and Polish-based ORLEN Synthos Green Energy plans to build 10. GE Hitachi also has agreements inked with companies in Canada, the Czech Republic, Poland, the U.K., the U.S., Sweden and others, according to its release.

“We’re in competition now in the U.K. to win reactors there,” Ford said at the Power Breakfast event. “We’re going to build a slew of these things.”

The BWRX-300 is currently in the U.S. Nuclear Regulatory Commission’s “pre-application” phase.

For more on GE Hitachi’s work on the BWRX-300, read WilmingtonBiz Magazine’s December profile on the company’s plans.