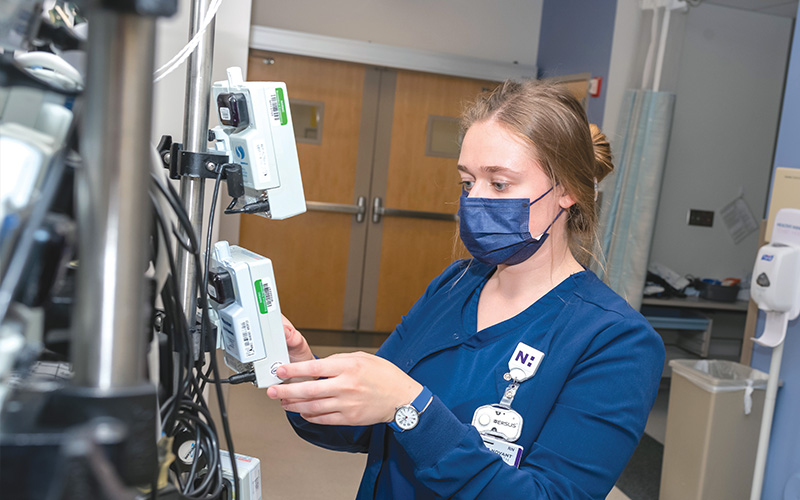 Money is one tactic used by the hospital to lure talent. In May, the Novant Health NHRMC advertised $15,000 sign-on bonuses for nurses, with some positions eligible for up to $20,000. Still, in August the hospital reported capacity to add about 400 full-time nurses to their staff of 1,700 nurses. A Novant Health spokesperson said in December that the hospital has “substantially closed the gap” of vacant positions with more permanent and traveling nurses.

Meanwhile, a coalition including business leaders, government officials, hospital leaders and representatives from area nursing programs met this year to discuss local solutions to the nursing shortage.  These discussions resulted in a move to purchase the former Bank of America building on North Third Street to expand Cape Fear Community College’s nursing program.

At CFCC, manufacturing production technician, distribution warehousing and machining applications courses were added in June. Another program, the Culinary Foundations course, is launching in January to create a pipeline of skilled line cooks.

Without a reliable labor pool, restaurants pared back menus and hours while they forged ahead with limited staff. “Now hiring” signs remained a ubiquitous feature on restaurant storefronts, while newcomer Blueberry’s Grill got creative with a Market Street billboard advertising their vacancies earlier this year.

High demand for hospitality workers translated to big gains in wages for that sector of the economy. In fact, hospitality workers drove double-digit wage gains in the Wilmington area over the past year, according to Mouhcine Guettabi, associate professor of economics at University of North Carolina Wilmington.

“A lot of the leisure and hospitality, a lot of the restaurants, experienced really high wage growth,” Guettabi said. “Why? Because they were experiencing labor force shortages and they were forced to increase wages.”