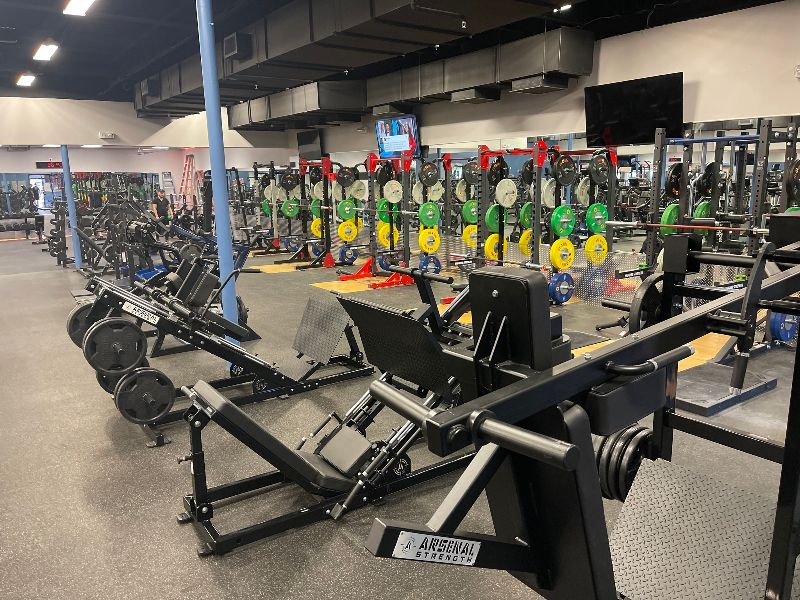 Fit4Life gym on Kerr Avenue underwent renovations that doubled its weight area as part of a recent transition to a new brand. (Photo courtesy of Fit4Life)
With a recent partnership to keep up with growing demand and gym trends, TF Fitness + Nutrition, now Fit4Life Health Clubs, is undergoing renovations and will open additional gyms in the region.

This month, the Wilmington gym with two locations announced it is now part of Fit4Life, a Raleigh-based chain that is described as “the fastest-growing chain in North Carolina,” a release stated.

Skip Lennon, former TF Fitness owner and current operator of Wilmington Fit4Life Health Clubs, said he was motivated to partner with Fit4Life to be able to grow and bring more gym options to locals.

“Partnering with them allows all of our members more clubs as they travel around and just be part of something bigger and better. [It] brings a different experience to our members,” Lennon said.

As part of this transition, the gym at 11 S. Kerr Ave. underwent a renovation and expansion completed last week. This includes doubling the free weight area, going from two squat racks to six, more machines and equipment, a new turf area with a functional trainer and an updated new Kid Zone. The gym is also now open 24/7.

This week, the location at 4310 Shipyard Blvd. is closed for similar renovations.

Lennon said these updates are a response to changing trends in the gym industry, with more people opting for weight training.

“The days of people coming in and just wanting to run on a treadmill are kind of over. You have people calling now asking, ‘Hey, how many squat racks do you have?’ We are able to add and kind of cater to that demographic and that's kind of really where the whole industry is going,” Lennon said.

“We opened up everything, just giving it more space because Kerr was getting crowded,” he added.

Fit4Life Wilmington is also opening a new location in the Murrayville area at 2307 North College Road, becoming the new anchor tenant of Murrayville Post Shopping Center. The new gym will be 35,000 square feet and is slated to have the same equipment and amenities as the other locations. It is projected to open by the end of the year, depending on supplies and construction work. The plaza and parking lot will be completely rehabbed, he said.

Another gym will be opening in Leland, with a new location for lease currently being sought, Lennon said.

Both of these new locations aim to provide more gym options in growing areas of the region, he said.

“The area, in general, is growing like crazy. With health clubs and working out, the number one reason why people join clubs is location," Lennon said. “Getting locations in those pockets of areas where people are living and, as the area’s growing, to service those people, is the major driving factor.”

Lennon said he hopes to continue to grow and have a gym available in major parts of the region.

“Our goal is just to open up as fast as we can to cater to those areas where people are living,” he said.