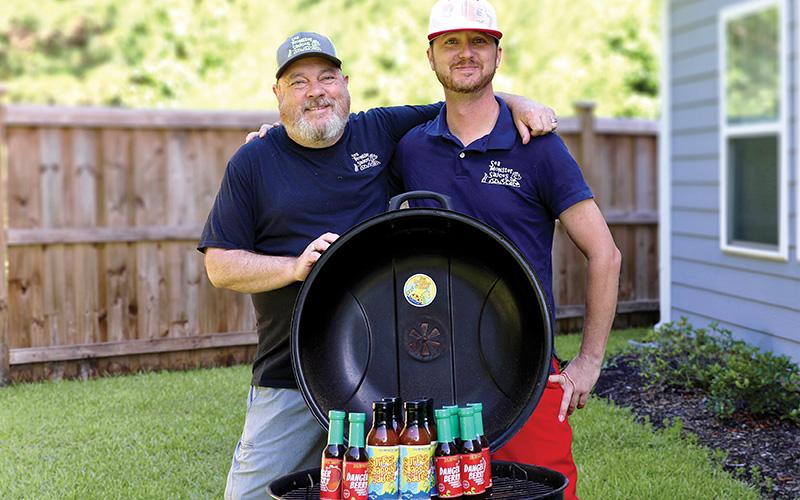 Sean O’Rourke (from left) and Brian Mack, co-owners of Sea Monster Sauces, show off their signature flavors, Surfer Slappin! barbecue and Danger Berry hot sauce. (Photo by Aris Harding)
It was the summer of 1989, and Sean O’Rourke had concocted his first iteration of what would eventually become the Surfer Slappin! barbecue sauce for a buffalo wing competition. He didn’t win the contest, but O’Rourke found a recipe he kept in his toolbox – something to whip up for Fourth of July get-togethers.

In 2018, O’Rourke’s son assumed ownership of The Dive in Carolina Beach, which featured wings. He asked his son if he could add his signature sauce to The Dive’s selections, cooked up a batch in the restaurant’s kitchen, and added it to the menu.

Customers soon began asking for the sauce on other items, like shrimp and chicken wraps. They asked if they could buy containers of it to take home, and that’s when O’Rourke said “the lightbulb went off.”

O’Rourke then partnered with an extended family member, Brian Mack (whose wife’s sister is O’Rourke’s daughter-in-law), to form Sea Monster Sauces. He knew Mack was the right match after witnessing his allout days-long competitive drinking extravaganza, “garage games,” which included a detailed scoring system. “It’s like a decathlon,” O’Rourke said. “The way he handled it and how professional and meticulous he was, that made me think that if I was gonna get a partner he was exactly the person I wanted.”

Mack said he had no real business background but has wholeheartedly embraced the venture. “We didn’t really know what we were doing,” Mack said. “It was never a dream of mine to become a sauce boss.”

The two started out bottling at the Veggie Wagon’s commercial production kitchen in Carolina Beach, where the business helped them secure federal clearance and nutritional values. Given Veggie Wagon’s own prolific inventory of original goods, the team quickly outgrew the local kitchen. Originally packaged in a squatty, 5-ounce jar, the bottles today feature a Loch Ness-like creature as the brand’s mascot.

By the fall of 2019, the team found a bottling facility in Tar Heel, North Carolina, and after tweaking the recipe a few times for mass production, nailed down a formula that’s now prepared in 300-gallon batches.

The Surfer Slappin! barbecue sauce, Sea Monster’s flagship, is a “sweet, tangy heat” – in that order. “It’s layered in exactly that manner,” Mack said. “First it gives you a big sweetness, then the tangy comes from a bit of vinegar and orange juice base. And then the heat, we call it ‘slap of’ heat, because it slaps you with a little red pepper flake and Tabasco sauce.”

The pair’s second sauce, Danger Berry hot sauce, is a strawberry habanero blend. Asked which is his favorite, Mack said, “I think that’d be like asking who’s your favorite kid,” before reluctantly choosing Danger Berry “because I can get a little more weird with that one.”

It took the team two years to nail down Danger Berry. “We definitely don’t rush any products just for the sake of having product,” he said. A new flavor, Lift Up, a hot sauce collaboration with the local band Signal Fire, will be released this summer.

Over the years, O’Rourke has secured Sea Monster’s placement in 160 retail stores, including its first international spot on the shelves of a store in Dublin, Ireland. About 60% of its sales take place within local businesses in Wilmington, 20% from vendor and pop-up markets and the remaining 20% through online wholesale partners. When visiting stores, O’Rourke said he has about an 80% - 90% success rate in getting them to carry the product. Once it’s on the shelves, customers help make sure the stores restock. “We’ve probably got a 90% reorder rate right now for our retail customers since their customers love it and always ask for more,” Mack said.

In early June, Mack said the company sold its 20,000th bottle. “I’m not sure if that’s a great milestone or not, but we were super stoked about it,” he said. Mack still works full time as a property manager, and O’Rourke works various gigs full time, after burning out from a career as a chef. They’d both like to fully commit to Sea Monster, and O’Rourke said he feels like they’re close to being ready. “It’s definitely been a labor of love,” he said. “It’s not getting to the point where it’s paying the bills yet but we’re on the verge, hopefully, of taking that turn.” 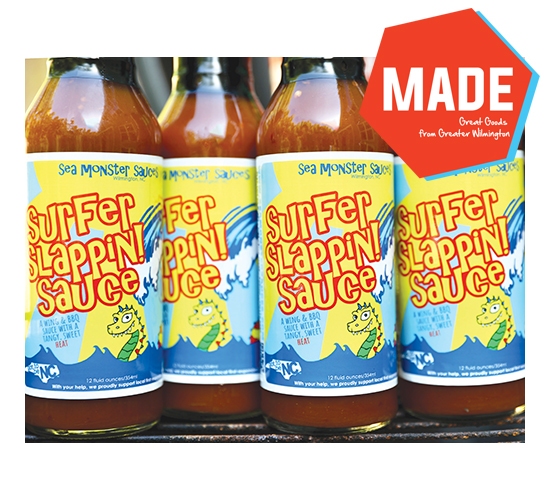 Company description: Sea Monster Sauces is a sauce manufacturer that got its start in Wilmington, first producing its signature Surfer Slappin! hot sauce based off a 33-yearold family recipe O’Rourke first crafted in 1989 for a chicken wing contest. The company is on the verge of offering three different flavors, with two sold in over 160 locations.

Product distribution: Mack: “Wilmington, North Carolina, is by far our largest market as far as having retailers. We have other retailers in probably 20 out of the 50 states.”

What’s planned next? Mack: “We recently collaborated with the band Signal Fire on a new hot sauce. They love Surfer Slappin! sauce, and they wanted to get together with us so hopefully mid-summer we’re releasing Lift Up hot sauce in collaboration with them. It’s our first serious collaboration.”