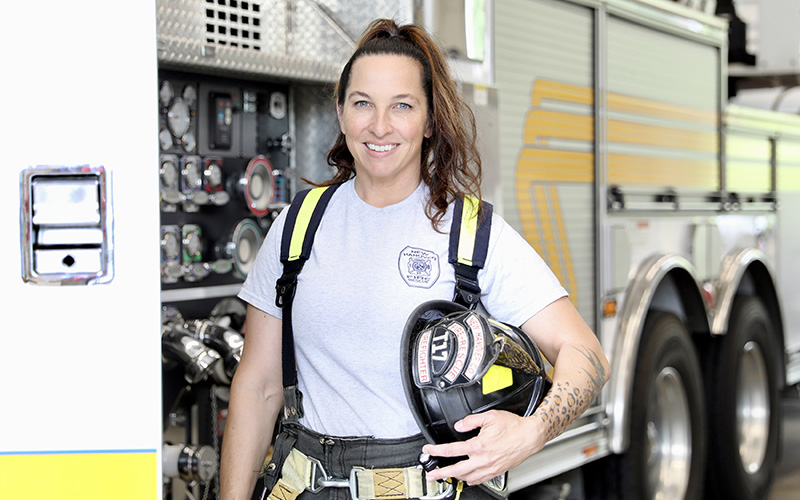 Like other firefighters in New Hanover County, Laura Bransford recently received a significant pay bump as part of the county’s re-evaluation of its pay scale to confront tight labor market conditions. (Photo by Aris Harding)
Laura Bransford accomplished her dream of becoming a firefighter in her late 30s.

The 43-year-old Leland resident commutes to her job at the New Hanover County Fire Department station on Murrayville Road at least three days a week for 24-hour shifts.

Bransford’s pay started at about $34,000 a year, but in a recent raise of nearly 30%, she now makes about $46,000 a year. Her change in compensation was part of an update to the county’s pay plan for first responders that officials announced in April.

The update included an increase of 12.2% for employees in the New Hanover County Sheriff’s Office and 911 Communications and an increase in pay for fire rescue employees from 17.8% to 29.8%, depending on the position.

“It’s amazing. I know everyone’s very excited to have a livable wage, and just with the inflation and everything, we just have to keep up with that,” Bransford said, “because a lot of us can’t afford to live in New Hanover County and still can’t, even with this pay raise.”

An example: To afford to live in a three-bedroom apartment in New Hanover County without being cost-burdened, a resident or household would need to bring in at least $57,960 a year, according to a 2021 study by the National Low Income Housing Coalition.

That fact, and Bransford’s story, are part of a bigger economic picture unfolding in the Cape Fear region and beyond.

According to the U.S. Bureau of Labor Statistics (BLS), the share of the state’s working-age population employed or seeking employment was about 60% in April – up from pandemic lows but still lower than any pre-pandemic measure on record.

This shrunken labor pool, paired with record consumer demand, has led to a roughly 2:1 ratio representing two applicants for every one open position, lending more power to employees, according to Mouhcine Guettabi, University of North Carolina Wilmington associate professor of economics.

“You have a lot of employers that are all at the same time competing for the same workers,” he said. “Job openings are still really high and quit rates are also still elevated.”

This combination and heightened competition have squeezed employers to up their pay. “It’s really at the end of the day supply and demand ... high elevated demand by employers, too few workers wanting or able to work, and you end up with this upward pressure on wages,” Guettabi said.

Hourly wage growth in the Wilmington MSA was 11.4% year-overyear as of March (the most recent month reliable local data is available, according to Guettabi), compared to the U.S. consumer price index (the inflation gauge) of 8.5%.

It’s possible Wilmington’s strong wage growth average, beating out the state average (9.8%) and that of other urban markets such as Charlotte (1%) and Raleigh (9.9%), could be driven by the region’s outsized dependence on the tourism industry. But Guettabi points out the region’s robust growth trajectories are also likely contributing to driving up Wilmington’s average wage increases.

NOT ALL GOOD NEWS

Recent wage gains may sound like welcome news for the labor force, but Guettabi said it’s important to note the highest jumps are concentrated in specific industries, especially those that were already reliant on low-wage labor. Sectors like leisure and hospitality and construction have seen double-digit, year-over-year percentage gains, while those in finance and information have been more modest, lower than the rate of inflation.

“If you're in a in a sector like information … you’re really not seeing big raises,” Guettabi said. “Your real wages decline,” he said, if they haven’t increased on par with the inflation rate. “A lot of the gains in workers are going to new hires.”

Existing workers in some sectors were already relying on outside dollars to supplement their incomes.

“A lot of us in the fire service, we have either side businesses or work a lot of overtime,” Bransford said. “Some people even have second and third jobs. But we love the fire service so much, it’s worth it for us to have those other jobs or a side business to provide for our family as well.”

Before the pay raise, “a lot of us were living paycheck to paycheck just to make car payments and pay for groceries, especially because of inflation … with the gas prices increasing, the groceries increasing, it’s constantly playing catch-up,” Bransford said.

Bransford said New Hanover County has great benefits and a strong support system for its employees. But offering competitive pay is also important “so we get rock star applicants,” she said.

An already stretched profession exacerbated by the pandemic, nurses are increasingly hard to come by. As of May 24, Novant Health was advertising a $15,000 sign-on bonus for nurses in Wilmington. A hospital spokesperson said these bonuses could reach $20,000, depending on the role.

The N.C. State Ports Authority started offering sign-on bonuses of $1,500 as of last summer and increased its pay structure by 10%, according to a spokesperson, due to competition in the labor market.

The retail sector hasn’t been exempted from current trends. Verizon, which has raised its starting wage to $20 and hour for new and existing customer-service employees and retail employees, announced in April that it was offering sign-on bonuses of $2,500 for new retail specialists and $3,500 for assistant managers at some of its stores. In May, Bank of America upped its minimum hourly wage to $22, a $45,000 salary.

FOR WHAT IT’S WORTH

In addition to New Hanover County, other public employees have been awarded pay raises. In the past few months, Carolina Beach employees were budgeted between 8-10% higher wages; Wilmington public safety employees could see up to a 15% hike; and an overall 6.8% increase for New Hanover County employees’ is set for the upcoming budget cycle.

But recent private-sector wage growth hasn’t been as clear. Top private employers in the region contacted for this article either declined to share information or did not respond to inquiries.

Private-sector wages in North Carolina MSA were up 9.8% year-overyear in March, according to BLS data. An anticipated economic cool off could tilt the power dynamics back in favor of employers, and/or a re-entry of workers on the sidelines could even the score. “What happens, whether that happens quickly, whether it affects the reason we are to the same degree is difficult to tolerate,” Guettabi said. “The dynamics here are different. But undoubtedly, if we see a slowdown in economic activity, demand for workers is going to come down as well. And if demand for workers comes down, then you're going to see a decline in these offer rates or wages.”

Even if an earnings slowdown occurs in either the public or private sectors, employees are showing signs of a renewed drive to ask for more.

“The fire service is changing and getting more progressive. Traditionally, we’re humble and we’re quiet, and I think we need to speak up and know our value,” she said. “We are all worth more than what we’re getting paid.”