Gunn Turns Up The Volume 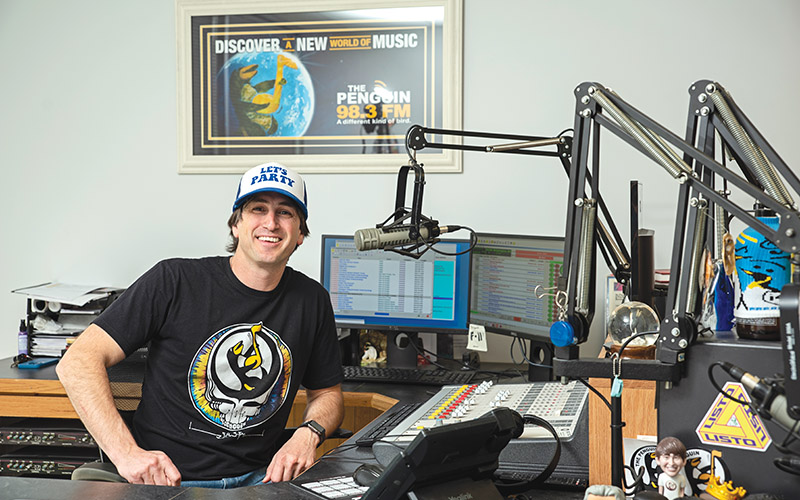 Beau Gunn, general manager of Local Daily Media, has been a force behind the area’s live music scene. (Photo by Michael Cline Spencer)
To many fans of live, alternative rock music in Wilmington, Beau Gunn is the music man. In the 14 years (and counting) of his career, he has become the force behind The Penguin, the managing hand of Local Daily Media and the impresario bringing live talent to the Hugh Morton Amphitheater at Greenfield Lake.

It’s not everyone who can find work that matches his passion, but Gunn did so – right out of college at University of North Carolina Wilmington.

“The trajectory started my senior year at UNCW, when I took an internship with The Penguin radio station. That got me set on a path of music I was always passionate about,” he said. “When The Penguin was going to celebrate its fifth birthday on Aug. 18, 2008, that happened to coincide with finished updates to the Greenfield Lake Amphitheater.”

The Penguin booked a concert there to mark its milestone. More than 900 people stood in line to buy tickets to a concert in the newly refurbished amphitheater. And, while the radio station had not planned to create a concert scene to reinforce its brand, station staff saw an opportunity.

That initial concert “made a little bit of money, and we had a blueprint,” Gunn said. “That set Wilmington on the live music trajectory that you see today.”

Gunn said it was “blind, dumb luck” that landed him at The Penguin at this pivotal time.

“It was valuable to get my foot in the door; I didn’t have any onair radio experience,” he said of his internship. “When I graduated, I parlayed my contacts into a sales position at The Penguin. Then I got into programming, which is an unusual move.”

The programming break came when two DJ stalwarts were let go. Despite the fact that he had no experience programming – or, for that matter, hosting on-air – Gunn asked for the job and got it.

“The owners thought they were going to flip the station to another format anyway,” Gunn said.

But that flip never happened, and, under Gunn’s guidance as its new program director, The Penguin prospered with its AAA (Adult Album Alternative) format.

In 2012, media entrepreneur Tom Davis decided to replicate in Wilmington what he had succeeded in creating in the Williamsburg, Virginia, media market: a “hyper-local” online news site that would provide content to sister radio stations. Those stations, in turn, would drive traffic to the online news site. He purchased three Wilmington stations, The Penguin and two others, which ultimately narrowed to one, The Dude, with its country format. Davis launched Port City Daily as the online news outlet. Gunn was part of the package.

“It’s mutually reinforcing and gives you an opportunity to connect with your audience,” Gunn said of the media cluster. “It’s a niche idea that has worked well here. What we do best is to mirror our community.”

Gunn is now general manager of the Wilmington group, Local Daily Media. While he oversees Port City Daily, he says he leaves the operations to the news staff. He continues to program both The Penguin and its sister AAA station in Williamsburg, The Tide. He’s also been a force behind the growth of Greenfield Lake Amphitheater as a live concert venue.

After that initial anniversary concert in August 2008, The Penguin hosted another successful concert at the amphitheater that fall, and two more the following year. By 2010, Gunn and The Penguin had produced 12 shows.

“We recognized we had something. We were selling more tickets here than venues in Raleigh and Charlotte [for the same performers],” Gunn said. “The market here was so starved and people were so happy not to have to drive to see live entertainment; they were supporting those shows.”

“I have a production company called Beau Gunn Presents,” he said. “Once Live Nation won the contract from the city I became a consultant for Live Nation, so I buy the talent [for the amphitheater concerts]. Live Nation produces the show. Fortunately, they have listened to me and kept our mission to enhance the experience at Greenfield Lake.

“I knew Live Nation was rightfully in charge, and I needed to help them progress their mission as they wanted to see it progress. They have done a lot of things to improve Greenfield Lake Amphitheater: They’ve renovated the backstage dressing rooms, an important detail to make sure artists are comfortable and have fun.”

While Gunn is not involved with programming at Live Oak Bank Pavilion, his longtime production manager Jenny DuBois has become the Pavilion’s production manager as well. “She’s the reason everything goes smoothly,” he said. “She treats artists and fans so well. From A to Z, the woman is a superhero in my book.”

Correction: This version updates the name for Local Daily Media.