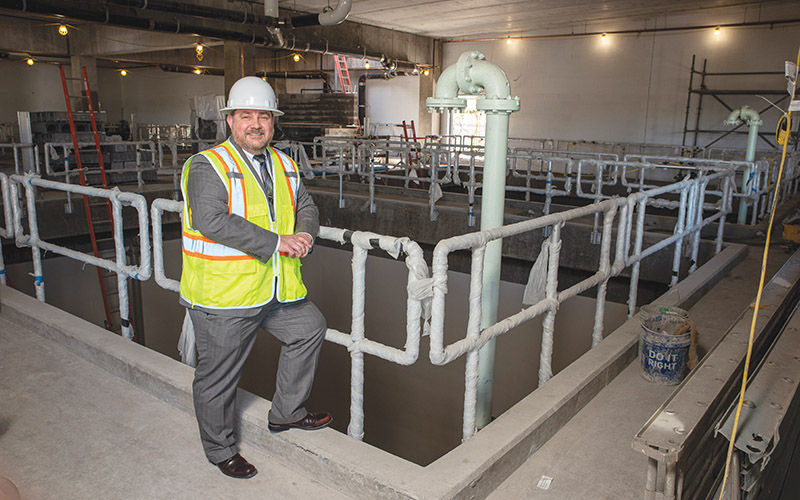 CFPUA director Kenneth Waldroup stands on the edge of one of the utility's new 26-foot deep granular activated carbon deep-bed filtration basins, which are being installed as part of a $42 million enhancement project. (Photo by Michael Cline Spencer)
Five years after the front-page discovery of per- and polyfluoroalkyl substances present in alarming amounts in the Wilmington region’s public water supply, Cape Fear Public Utility Authority will have an enhanced system in place capable of filtering them out, nearly to the point of non-detection.

In June, Cape Fear Public Utility Authority (CFPUA) will engage its new deep-bed granular activated carbon (GAC) filtration system at the Sweeney Water Treatment Plant. By August, utility officials expect the process to be fully dialed in, capable of removing at least 90% of PFAS, the emerging contaminants in present in the raw water pulled from the Cape Fear River.

The results mean all 190,000 of CFPUA’s year-round customers will soon have access to drinking water – a welcome scenario, considering the region’s decades-long exposure to the so-called “forever chemicals.”

​Sweeney services roughly 80% of CFPUA customers. The remaining 20% are serviced by the Richardson Water Treatment Plant and Monterey Heights, systems in the northern and southern ends of the county that source from groundwater. Though there have been occasional detections of small amounts of PFAS in these groundwater systems, "averages are under a single part per trillion for any given compound," according to a CFPUA spokesperson.

Even without the new GAC setup online, Sweeney is regarded as one of the most advanced treatment systems in the state, according to CFPUA executive director Kenneth Waldroup, who joined the utility last summer from the city of Raleigh’s public utilities department.

When he first moved to Wilmington, Waldroup said he told his wife they would soon have no need for their Brita filter. “I told her, ‘When this new facility goes online, we can toss it,’” he said. “We’re building a facility that has 3 million pounds of the same material that’s in your pitcher.”

Sweeney’s eight new GAC beds are massive – a dizzying 26 feet deep. Still under construction, the facility is essentially a super-sized version of the utility’s current biological filtration process, which CFPUA officials refer to as the “little filters.” The 14 little filters, in place prior to the June 2017 GenX revelations, are currently reducing PFAS levels by about 35%, according to Carel Vandermeyden, CFPUA’s director of treatment and engineering services.

Each of the new “big filters” will hold about a half-million gallons, Vandermeyden said, where unwanted compounds will bind to the tiny crystalline grains of carbon through a process known as adsorption. Once open, Sweeney will become the largest GAC plant in North Carolina, Waldroup said.

“We could fill an Olympic-sized swimming pool with granular activated carbon,” Waldroup said.

New annual operating costs – all encumbered by filter replacements, not a need for new personnel – will vary depending on the CFPUA Board of Directors’ forthcoming direction.

Waldroup recommends the former option, but said he would rely on his board’s decision regarding their comfort level with the presence of unregulated compounds.

The enhancement project will cost residential ratepayers an average $5 more per bill, a hard-fought reality CFPUA tried to avoid and is still aiming to rectify through litigation against DuPont and its spinoff, Chemours, the main companies that discharged the compounds into the watershed. Heralded for their nonstick abilities, PFAS have been linked to adverse health outcomes in humans and animals.

“Unfortunately, this is the history of industrialization: We are constantly discovering new things that we want to bring to market,” Waldroup said. “And sometimes we move them to market so quickly that we fail to understand the environmental and human health impacts until many years later.”

Across the Cape Fear region, local utilities and governments have or are budgeted to spend roughly $300 million to address PFAS, according to a Business Journal analysis (this count excludes legal fees expended on behalf of the region’s raw water utility provider, the Lower Cape Fear Water and Sewer Authority, and Wrightsville Beach, which both aren’t being charged until a resolution is reached, and Brunswick County, which declined to share its numbers).

This includes CFPUA’s at least $2.6 million in legal fees, $48 million in infrastructure upgrades; Pender County’s planned $79 million reverse osmosis system (of which PFAS removal is a secondary motivator, behind a need for additional capacity); Wrightsville Beach’s soon-to-be $455,000 in infrastructure changes prompted by PFAS contamination in one of its wells; and Brunswick County’s $167 million reverse osmosis (RO) system.

Brunswick County’s new RO upgrades are about 40% complete, according to a county spokesperson, and will go online next summer, with full beneficial use projected in early 2024. Pender County’s RO plant, which will serve the Hampstead and Scotts Hill area, is planned to be constructed in the next five years, according to its utilities director.

Except for Pender County, the utilities are jointly suing Chemours and DuPont in a federal suit first filed in 2017. Through this litigation, the utilities are demanding the polluter pay for the upgrades required to filter the potentially harmful substances the company created out of the water supply. Discovery begins in June, per a scheduling order entered last May – the latest item on the federal suit’s docket.

“All we’re looking to do is to seek justice for our community and recompense for the cost that they’re having to bear,” Waldroup said.

CFPUA is also awaiting an N.C. Court of Appeals decision, contesting a district court’s 2020 ruling that denied its motion to intervene in the Cape Fear River Watch’s lawsuit against Chemours. That suit resulted in a 2018 consent order with the N.C. Department of Environmental Quality, mandating the company reduce its PFAS discharges – an agreement CFPUA called inadequate.

Waldroup said CFPUA is open to settling the federal suit to recoup its costs. “We’ve been trying to engage Chemours in multiple arenas – not just in the litigative arena, but we will engage them in the public arena,” he said. “We want to demonstrate to them that it’s good business to come settle their case with us. They’re actively trying to improve their public persona.”

In recent ads, Chemours has depicted itself as a “good neighbor” and promoted its planned barrier wall designed to block PFAS from reaching the river. The ads quickly sparked backlash from local officials. Chemours did not respond to a request for comment.

“What we’re suggesting to Chemours is, if you’re truly a good neighbor, you want to be in the game for the long-haul, come resolve your outstanding liabilities with your neighbors downstream,” Waldroup said.

Despite the unwanted position Chemours put CFPUA and its customers in, Waldroup looks forward to the utility getting to promote its ultra-clean product, as opposed to remaining stuck playing defense for a contamination crisis it didn’t cause.