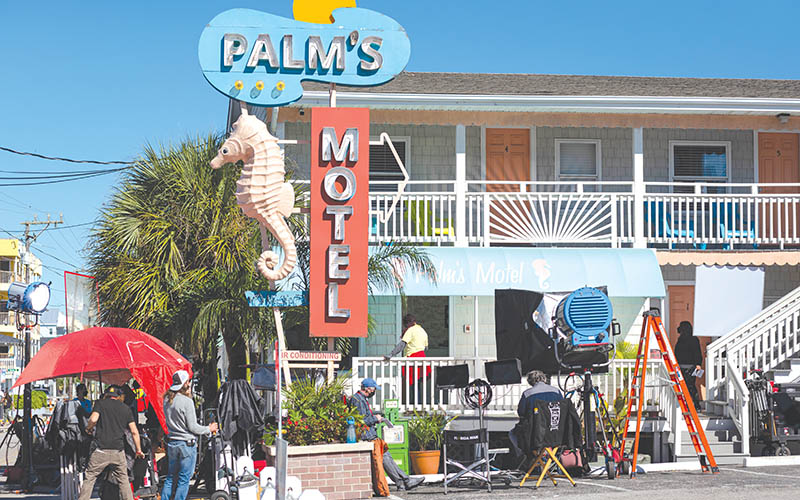 Crews work in Carolina Beach in October on the Netflix series Florida Man, one of several productions filmed in the area during a record-breaking year.
This year shaped up to be “the biggest year in our history” for filming in the Wilmington area, said Wilmington Regional Film Commission Director Johnny Griffin.

He also said that as a result of the increased activity in 2021, Wilmington- based film crews stayed busy.

Cash flowing into the state from the productions set a record. The N.C. Film Office reported more than $400 million in spending by film promotions statewide as of August, with an estimated $350 million coming from projects in the Wilmington area.

The overall spending figure eclipses North Carolina’s previous record of $373 million from 2012, when Iron Man 3, We’re the Millers, Revolution, Homeland and Banshee were filmed in the state.

Also according to the N.C. Film Office, productions continue to be drawn to the state’s skilled film workforce, infrastructure, variety of locations and the 25% rebate offered through the N.C. Film and Entertainment Grant.

The Wilmington City Council approved a grant of $400,000 in American Rescue Plan funds to finance a five-week workforce training program for up to 90 people who would like to learn a trade in the film industry. The rise of streamed content, with its hurry-up approach, has added impetus to expand available talent, along with a push for a more diverse workforce in the industry.

The other announcement: that the Mel Gibson movie, Boys of Summer, would be filming here.

Boys of Summer represents the kind of small feature film that works very well with the current incentive, and there are still plenty of similar projects that prefer Wilmington to, say, Atlanta, Griffin said.

“We want to leave it alone and work it for a while,” he said. “The fact that the [funding] sunset provision has been removed, and that there’s stable funding for the incentive program, and that HB2 [the ‘Bathroom Bill’] has gone away, is all good. When we had HB2, Disney and Netflix wouldn’t come here. Now we’ve got a Disney series and several Netflix projects. They represent a total of about $200 million from companies that wouldn’t do business with us when we had the Bathroom Bill.”