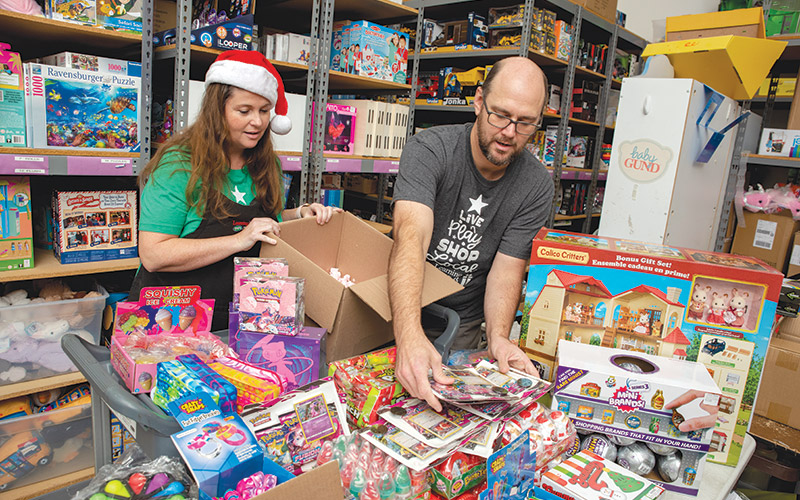 Angel Fair and her husband, Mark Fair, owners of Learning Express in Wilmington, began preparing for the holiday shopping season last Christmas as supply chain problems continued to ramp up. (Photo by Michael Cline Spencer)
For many people the holidays are full of anticipation. Children eagerly await gifts from Santa; adults often look forward to the season’s special events and visits with loved ones.

But for Mark and Angel Fair, owners of Wilmington’s Learning Express Toys, anticipation has meant something different: It’s what has enabled them to stock their shelves and successfully navigate the year’s biggest shopping season despite supply chain bottlenecks.

Mark Fair said that inventory shortages and delayed shipping of children’s toys and games has been going on for longer than a year.

“We could see this coming from a long way away – at least 18 months,” he said. “We’ve been preparing for this Christmas since last Christmas. Last Christmas we were telling people to shop early; it’s been getting steadily worse since then. We had difficulty keeping things on our shelves last year. Right now, it’s not too bad, but that’s because we anticipated the bottleneck situation.”

Many of the products arriving at Learning Express now are from orders the Fairs placed as long ago as last February. Certainly, Angel Fair said, they ordered this year’s holiday inventory no more recently than May.

“It was anticipation; it was planning on our part,” she said.

Supply chains have been squeezed from both the production and the consumer ends for at least 18 months, according to a Nov. 17 story in Simply Wall Street, an investor information site.

“Manufacturers of all kinds shut down operations earlier last year for at least a few months, only to reopen shortly after with much higher output. This was thanks to extraordinary demand from consumers who, for the most part, had excess cash that wasn’t being spent on other discretionary expenses (i.e., travel, restaurants, etc.),” the piece stated.

“All this led to the people in the middle (the ports, trucks, warehouses, cargo trains, etc.) being pushed beyond their maximum capacity to try and handle the demand,” the story continued. “This has resulted in the huge delays that almost everyone around the world has likely experienced in some way or another.”

“Everything that could go wrong has gone wrong,” he said in a Nov. 18 WilmingtonBiz Talk interview. “As you know, there are at times more than 100 ships anchored off the coast of L.A. waiting to be unloaded, and all the goods that we want for Christmas are in those containers.”

Perishable goods in refrigerated containers are at risk of spoiling as their waiting ships run out of fuel, Rosen added.

Rosen, who charts consumer trends, added “The biggest problem overarching all this is that we are demanding and buying more than we ever have.”

Two factors affecting breakdowns in the global supply chain are a just-in-time inventory philosophy and global sourcing which, as Rosen explained, sends manufacturers “hop-scotching” around the world trying to find the cheapest sources of materials and labor.

While reducing the cost of goods, these two practices helped create that perfect storm when the pandemic hit, according to the supply chain professor.

Rebecca Scott, also interviewed for WilmingtonBiz Talk Nov. 18, said there were pressures on the supply chain even before COVID-19 spurred online purchasing and home delivery. Over the past decade, she said, people have shopped less in stores and more online, with goods delivered to their doorsteps.

“That shift increased pressure on the transport segment of the supply chain,” said Scott, who is a business analytics faculty member and colleague of Rosen’s at UNCW’s Cameron School of Business. “When we were hit with the pandemic and we could not go into stores, we started ordering more online.” 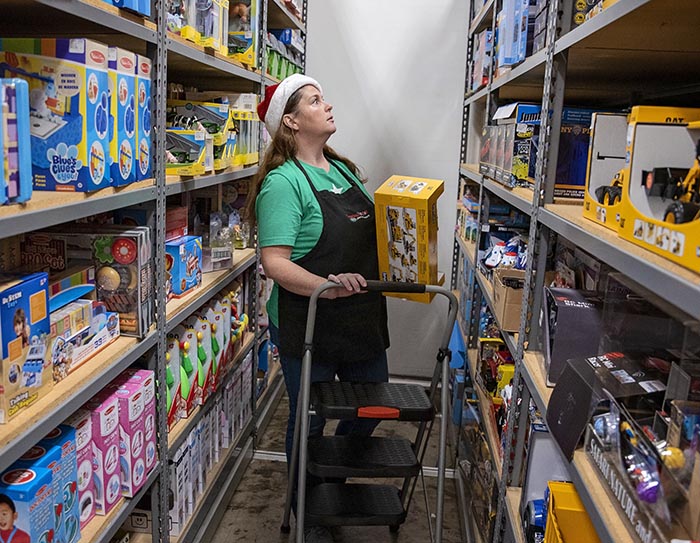 An uptick in online buying placed even more stress on transportation systems, she said, and the ripple impact went further back into the supply chain, affecting the transport of supplies from one warehouse to another, from warehouses to retailers and into individual stores. And for months during the first year of COVID, would-be shoppers sometimes had limited access to stores.

“And, of course, because the stores themselves couldn’t get materials, then they were limiting how much people could buy,” Scott said, adding that the COVID pandemic “truly blew up [the supply chain] to where most people were now feeling it on the individual consumer end.”

But prior to that, global sourcing, online ordering and just-in-time inventory practices were having an impact further up the supply chain, Scott said, explaining that supply chain participants “were trying to increase the number of truck drivers, improve our rail system so we could use the rail system to transport the goods instead of using trucks, and trying to improve our ports because more goods were being purchased.”

Rosen said the COVID-driven perfect storm was a result of poor planning.

“The manufacturers thought demand would fall in the pandemic, but they banked on it wrong; demand went up,” he said. “They canceled orders; they idled some factories. It was the exact opposite. They didn’t understand the psychological nature of you and I being cooped up and wanting to buy more. All of a sudden, they slowed production. We are behind the 8-ball because they guessed wrong.”

There is no quick fix, both professors agreed, although improvements are starting to happen. Asked how soon the chain’s broken links might be repaired, Rosen predicted it would be the fourth quarter of 2022 at the earliest before goods will flow freely again.

“The last numbers we saw from the American Truckers Association said they are short 80,000 drivers,” he said, adding that even inland ports are running out of space to store cargo containers waiting to be trucked to their next destination.

Scott agreed that it would be months before the supply chain is equal to the challenges facing it.

“There’s a shortage of truck drivers; there’s a port operation shortage,” she said. “Pushing past the ‘why’ and trying to bring those people back, you have a learning curve: The last thing you want to do is have someone working in a port that has never been trained. We’ll start seeing some trickles [in delivery] because people will volunteer to do those holiday hours, but holiday support people do not completely erase the shortage of drivers.”

The Fairs are grateful that some of their vendors supply exclusively to small businesses like Learning Express franchises rather than to box stores. Angel Fair cited one example: a company that makes hugely popular “pop-it” toys and other trendy items. Pop-it toys are rubbery toys with bubble-like protrusions that users can push for a popping feel and sound.

The company, Top Trenz, “values our business; they will sell to us lower than online,” Angel Fair said. “This allows us to be nimble and make decisions quickly. They air-freighted stuff in and held prices when every other company raised theirs. They are also a small, family-owned company; it’s companies like this that keep us going.”

Despite their success in trying to manage around a broken product supply chain, the Fairs are mystified at shortages in another: a supply chain of workers.

“I don’t understand why we can’t find people,” Mark Fair said. “I can’t wrap my mind about how people are paying their rent.”

Angel Fair said the shop normally has its holiday staff hired by the end of September.

“We need 14 during the holidays, so we hire 30 and expect to lose half of them by the end of October. Now, we have a fraction of that.”