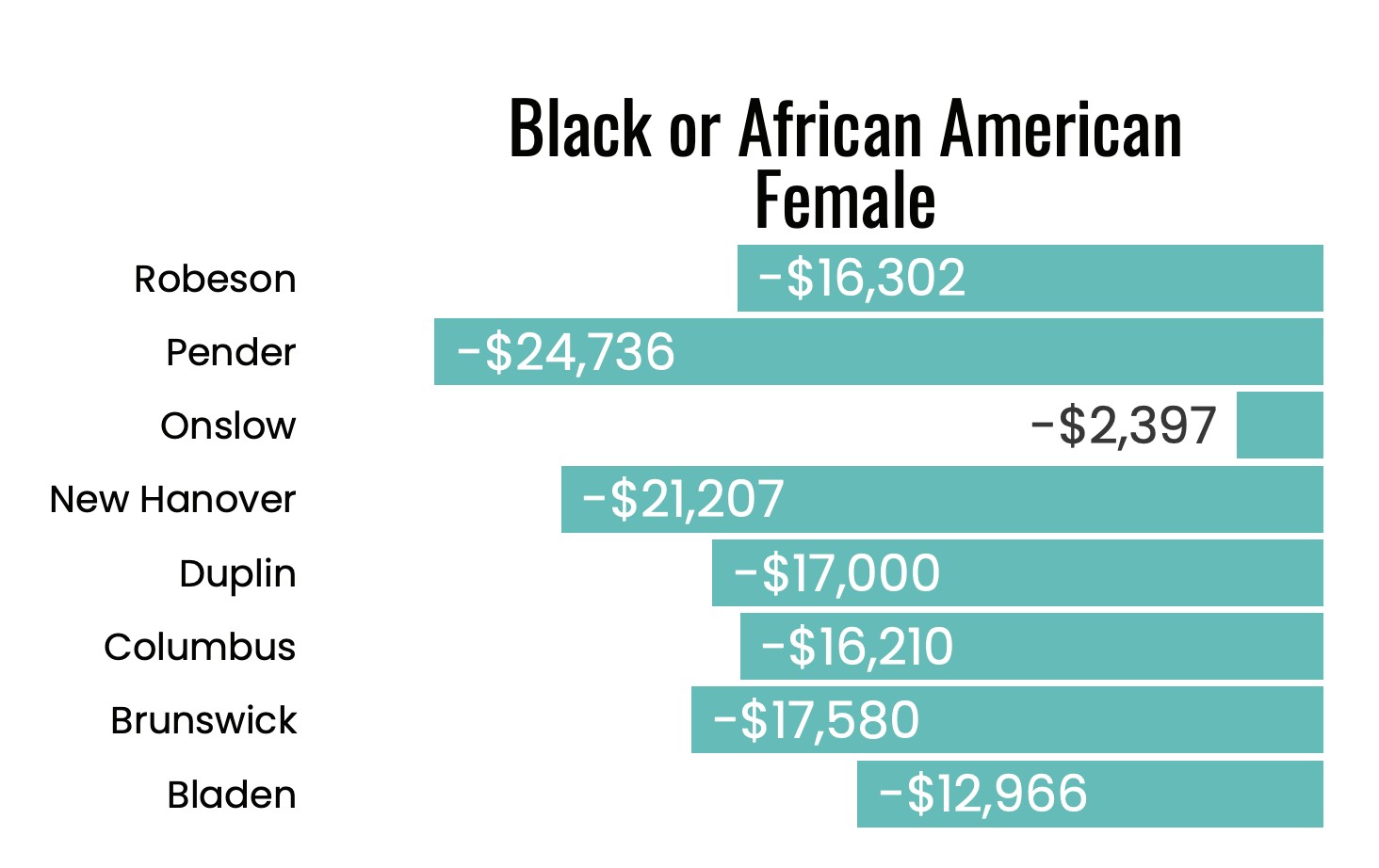 A graph shows the 2019 median earnings gap of Black or African American female full-time workers in the Cape Fear region as compared to white, non-Hispanic males. Based on U.S. Census data. (Courtesy of Cape Fear Collective)
The findings of a new report show that the Cape Fear region's economy is suffering from wage inequality, a housing shortage that makes homeownership nearly impossible for low-wage earners and discrimination.

The results of the Cape Fear Collective report, completed with support from the Kate B. Reynolds Charitable Trust, also show that the wage gap is particularly wide for women of color and that discrimination is felt more often by those who are job seekers with criminal records, according to a news release.

A specific finding included in the Cape Fear Inclusive Economy Report showed that Black or African American females in New Hanover County made $21,207 less per year in median earnings than white, non-Hispanic males, according to 2019 data.

The report also found that in the area, "the median earner in accommodation and food services is making $18,493, which is above the minimum wage of $15,080 but significantly below the federal poverty level of $24,300."

Quantifying disparities and sharing the data can help leaders decide where to focus efforts and investments, CFC officials said.

"We’re doing our best to get the word out there and get it in front of people who are decisions makers, policymakers and just say here’s what we’re seeing, here’s the narrative that we found," said Danté Haywood, data scientist with CFC. "Beyond that, us at CFC, we want to work with these organizations and nonprofits on their programming to help them understand ... where to locate funding and resources to help these communities."

The report, on which CFC worked with experts and organizations in the areas of entrepreneurial support, economic development and workforce training, "serves as a snapshot and compass check for the inclusivity of the Cape Fear region's economy," said Patrick Brien, CEO of CFC, in the release.

He added that the report "sheds light on potential steps our community can take to increase economic activity, widen economic participation in small business ownership and sustainable career paths and build a more resilient community that can weather storms for all types."

Pointing out some key findings, the release stated:
CFC, along with university and nonprofit partners, spent a year studying the region "to better understand economic drivers of health and prosperity to further refine its impact investing programs. The impetus of the report was the hypothesis that deploying capital in a more inclusive and strategic way while increasing local ownership opportunities is the key to reducing disparities, leveraging existing economic systems, and creating tangible impact in our community."

The report provides recommendations to aid the region's inclusive economic growth, including building pipelines for sustainable career paths that can "not only pay a living wage, but also often provide benefits like health insurance and retirement savings programs, critical to building generational wealth and near-term safety nets in the event of economic downturns or health emergencies.

"The region should continue to develop multiple entry points into growing, high-demand industries, including short-term skills training and boot-camp-style formats alongside more traditional degree programs. Digital literacy and technology training across all sectors should be prioritized."

The document also recommends continuing the conversation among stakeholders.

"CFC encourages local organizations, governments, corporations, and advocates to use the data and insights from this report to refine programming and innovate new interventions that will support upward economic mobility," the report stated. "CFC and its partners stand ready to support new and existing efforts with data science and investment infrastructure."