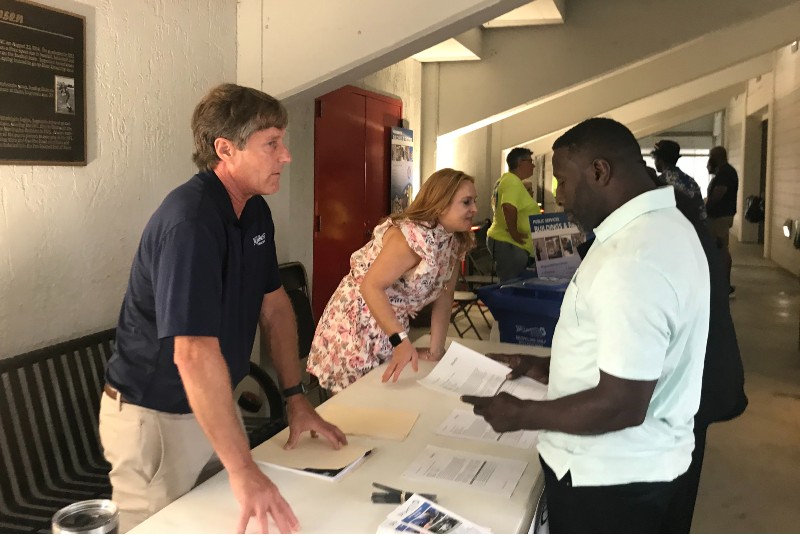 The city of Wilmington held a career fair Wednesday at Legion Stadium. (Photo by Cece Nunn)
Going to greater lengths to find employees has become a familiar theme among a variety of employers locally and nationwide.

Some of those employers are turning to recruitment events to draw attention to their openings.

Wilmington hasn’t hosted a job fair of its own in more than 10 years, he said.

“It's something that we're doing because of the current climate. We're struggling with recruiting for and filling positions, especially in construction and our trades areas,” Roberts said. “And then also we're seeing an uptick in turnover in public safety. So we thought it was a good idea to put this career fair on to inform the public about the work that we do, and the people that we serve. … we just really wanted to really showcase that.”

In addition to construction, the open city positions are in the parks and landscape, buildings and facilities, law enforcement and fire services career fields.

On Thursday, Novant and New Hanover Regional Medical Center are hosting a career fair in Wilmington to connect with job seekers and share information about the health system’s career opportunities, according to a news release.

"We have a lot of great positions to offer talent in the area and would love to have more people join our team," said Kalin Griffin, vice president of talent acquisition and executive recruitment for Novant and NHRMC.

The system currently has 800 openings, Griffin said, with 70% of those characterized as clinical positions.

"But I want to also highlight that we still have entry level to leadership level positions in corporate or non-clinical areas," Griffin said.

"We’re no different than what you’re seeing in terms of trends across the nation in terms of health care," Griffin said, "and we are just being very proactive about how we look for talent, let talent in and let talent think about positions that they might not have necessarily thought they’d be interested in or that a facility like NHRMC would offer."

The city and the hospital are competing with a multitude of other employers.

“Everywhere you go there’s ‘now hiring’ signs at every level, from entry level to senior leader and executive,” said Lisa Leath, president of Wilmington-based Leath HR Group. “Every industry, every store, every business is hiring, and so if you’ve got this great employer brand, which the city of Wilmington and NHRMC do, it’s still going to be hard to get people to come seek you out.”

For job fairs in general, Leath said she advises clients to “be prepared to interview and give offers on the spot. Don’t let them get away or somebody else will snatch them that day.”

“I am looking for a full time job with benefits,” Bradford said, choosing the city “because I can make a career out of it, and they have great benefits, and this is a great place to retire from.”