MegaCorp Gains Airtime During The Masters Through Player Sponsorship 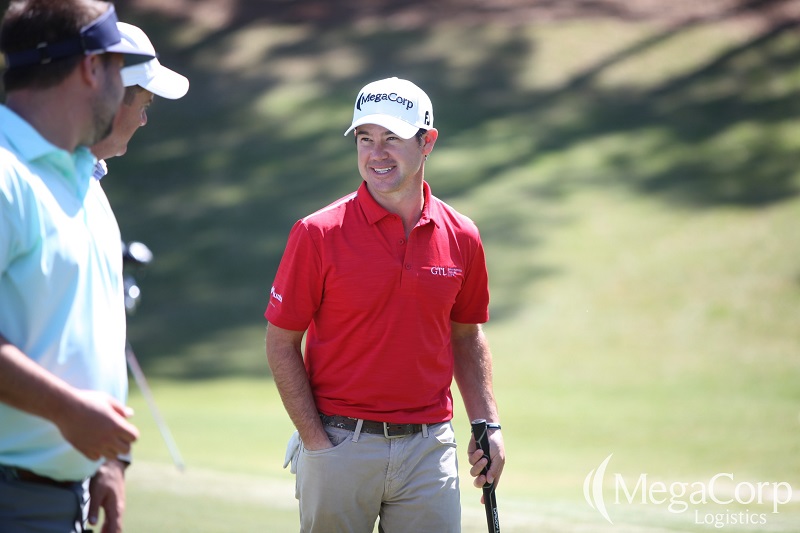 MegaCorp Logistics has had a sponsorship with golf pro Brian Harman since 2018. (Photo courtesy of MegaCorp)
During the Masters Tournament, pro golfer Brian Harman over the weekend donned a hat with the logo of Wilmington-headquartered MegaCorp Logistics for viewers to see throughout the internationally televised rounds.

The gear, worn by Harman at all of his tournaments, is part of a sponsorship the local logistics firm has held with the PGA Tour player since 2018, Katie Braskett, MegaCorp's director of marketing, said Monday.

Harman spent time on the leaderboard heading into the weekend in Augusta, tying for second behind eventual winner Hideki Matsuyama. He ended up tied for 12th after the final round Sunday, which draws millions of viewers. Harman -- and his MegaCorp hat -- head next to the RBC Heritage this week in Hilton Head, South Carolina.

MegaCorp began a 12-month sponsorship contract with Harman in 2018 and has renewed its contract with him every year, with the most recent renewal in January, Braskett said.

The sponsorship came about after MegaCorp’s CEO Ryan Legg met Harman and Harman's agent during a local First Tee fundraising event in 2017, she said.

Legg is also an avid golfer and fan of the sport and is involved in The First Tee of Greater Wilmington, Braskett said.

The 2017 event was at Eagle Point Golf Club in Wilmington, where Harman won the Wells Fargo Championship just a few months earlier.

"They all hit it off and had a great time," Braskett said. "He is such a wonderful person; we are so happy we have the privilege to be represented on the PGA Tour by him."

For the sponsorship, the company is not able to share the exact amount, she said. Braskett said, however, that he does come to Wilmington twice a year to do events with MegaCorp. The company also gets tickets to each PGA Tour tournament Harman plays in.

"It's good brand exposure for us, and it's a good talking and selling point when we're talking to potential employees and potential clients as well," Brassett said. "It kind of breaks that ice ... or starts a side conversation."

MegaCorp keeps a close watch on its Google analytics to see a correlation when Harman is on television, to track traffic to the company's website, Brassett said.

"We then take this a step further with retargeting campaigns to people who visited our website so have another chance to get to know us whether they needing us to ship their products (via full truckload, LTL, intermodal or air), or looking for a career," she said.

Harman's sponsorship is just one of several MegaCorp has with professionals in various sports, Braskett said.

The company also has other sponsorships with Chris Kanute of the National Professional Fishing League (bass fishing); Thomas Bass, a University of North Carolina Wilmington graduate and pro golfer on the Web.com Tour; and Kevin Rivenbark, a Galot Motorsports (drag racing) professional.