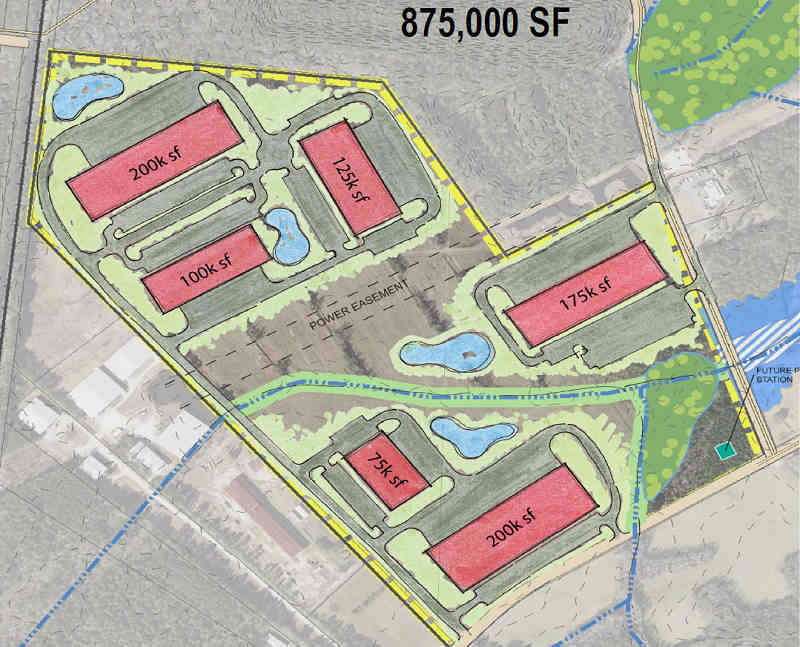 Preliminary site plans for the Blue Clay Road Business Park show several buildings that could be developed at the site. (Photo courtesy of WBD)
Economic development officials say that $3.6 million earmarked for the extension of water and sewer infrastructure to 120 acres owned by New Hanover County will be a benefit to growing investment and jobs in the county.

The Blue Clay Road site, while not being used now, has been dubbed Blue Clay Business Park.

The $3.6 million is part of $45.4 million the county is expected to receive from the American Rescue Plan, signed into law March 11. County officials announced a preliminary spending plan for the money on Wednesday.

“Essential utilities are requisite in attracting new investment and jobs. New Hanover County’s recognition of this, and the subsequent decision to invest in infrastructure, further substantiates Blue Clay Business Park as a business destination," said Wilmington Business Development CEO Scott Satterfield in an email this week.

The Blue Clay Business Park infrastructure is one of two water and sewer projects that would be funded under the county's plan. Also included is $4 million in water and sewer extensions for Sidbury Road to support lower development costs for affordable housing in northern New Hanover County.

County Manager Chris Coudriet said this week that the area needs to be able to accommodate growth in both housing and jobs.

“We have to as a community prepare for that. That means we have to have water and sewer in the ground so that builders, developers can put up the housing stock, and we have to have sites that future entrepreneurs, future business leaders are going to need . . . to put their facilities in play, as their new workforce moves in, as their existing workforce here retools,” Coudriet said earlier this week.

Extending water and sewer to Sidbury Road and Blue Clay Business Park would not have come about in the near future, at least not in the next two to five years, were it not for the American Rescue Plan funds, he said.

The county contracted with Wilmington Business Development (WBD) to do a project to study the site and due diligence work on the property, allocating funding to WBD to do the work.

The site in 2019 was also selected for Duke Energy's Site Readiness Program, which includes an initial assessment of industrial sites from the perspective of a site selection consultant and a more detailed buildability assessment, as well as development of conceptual plans for the sites by expert land use and site planners.

WBD officials said that its due diligence reports are now being used to market the site. The infrastructure investment will make the site more attractive to employers.

“Preliminary layouts highlight a 120-acre site (85 of which is buildable) where upwards of 875,000 square feet can be accommodated. Another nice differentiator is the ability" for rail to serve the location, Satterfield said.

The county's Blue Clay Road property is close to Interstate 40 and the Wilmington International Airport.