The company has created GEH SMR Technologies Canada Ltd. to "support the deployment of the BWRX-300 Small Modular Reactor (SMR) in Canada," GE Hitachi officials said in a news release. 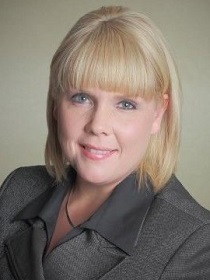 The company has also named Lisa McBride (right) as country leader for SMRs, stated the release.

The new business entity will share a location with another GE business in Markham, Ontario, said GE Hitachi spokesman Jon Allen, in an email.

McBride is based in the Toronto area of Ontario, Canada.

Over the past year, GE Hitachi has been seeking to implement its SMR technology in Canada, with a first announcement last February of its initial submittal to the Canadian Nuclear Safety Commission (CNSC) for a vendor design review of the company's BWRX-300 SMR design.

GE Hitachi has also been seeking to bring these technologies to nuclear markets in the Czech Republic, Poland, Estonia and the United States, with progress being made in various stages.

In the United States, GE Hitachi achieved a licensing milestone with the U.S. Nuclear Regulatory Commission (NRC) with its BWRX-300 small modular reactor, in which the NRC issued a final safety evaluation report for the first of several licensing topical reports that have been submitted for the proposed SMR model, according to GE.

GE Hitachi officials expect the BWRX-300 to require "significantly less capital cost per MW when compared to other SMR designs."

SMRs can be used for power generation, heat processing, desalination or other industrial uses, according to the U.S. Department of Energy.

"By leveraging the existing ESBWR design certification, utilizing the licensed and proven GNF2 (a product of its Global Nuclear Fuel joint-venture business) fuel design, and incorporating proven components and supply chain expertise the BWRX-300 can, GEH believes, become the lowest-risk, most cost-competitive and quickest to market SMR," officials said in the release.

McBride, in her new role in Canada, will collaborate with Canadian customers, stakeholders, suppliers and partners in GE Hitachi’s efforts to bring the first grid-scale SMR to market by 2028, GE Hitachi officials said in the news release. She has nearly 18 years of nuclear industry experience in the Canadian energy sector.

"As we continue to advance the BWRX-300 we look forward to making future announcements about the Canadian SMR business," Allen said. "We continue to make significant progress in advancing the BWRX-300 in Canada and are on track to make additional submittals to the regulator in the coming months as part of the Vendor Design Review of the technology."

The majority of the engineering work in support of the design and licensing efforts for the BWRX-300 will take place in Wilmington, Allen has previously said.

“We are quickly progressing to further build our local presence by identifying key suppliers and enhancing relationships with stakeholders and communities,” McBride said in the release of the Canadian business.

McBride is president of Women in Nuclear Canada, an organization of more than 3,000 industry members across Canada, stated the release. She also serves as chair of the Women for STEM Council at Ontario Tech University and is a member of the Canadian Nuclear Association board.

“GE has been a pioneer in Canada’s commercial nuclear energy industry since the 1950s and was part of a consortium that developed the country’s first nuclear plant, the Nuclear Power Demonstration unit in 1962,” Jon Ball, executive vice president of nuclear products for GE Hitachi, said in the release. “With the establishment of our Canadian SMR business, we look forward to building on this legacy and bringing the world’s first grid-scale SMR to Canada, positioning Ontario as a hub for SMR technology.”