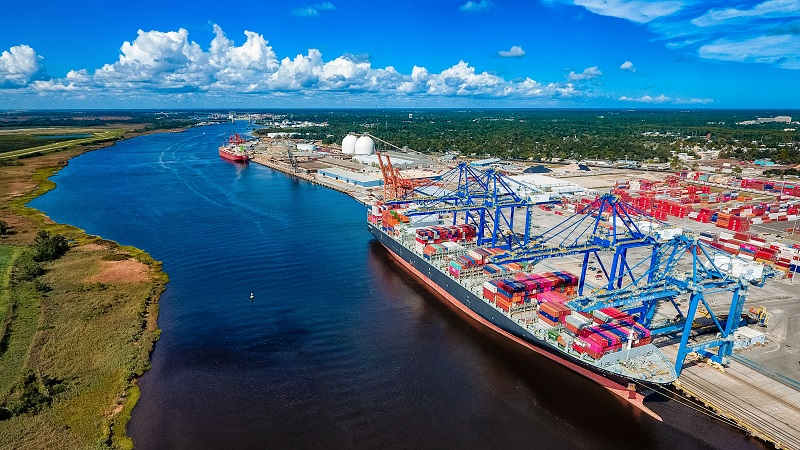 The Wilmington Harbor Navigation Improvement Project proposed by N.C. Ports is now in federal legislation, moving it forward in the federal process. (File photo)
Now that the $834 million Wilmington Harbor Navigation Improvement Project is included in federal legislation, funding for studies will be needed to keep the project rolling through the process, officials with the U.S. Army Corps of Engineers said this week.

The N.C. Ports project, which aims to deepen the Wilmington Harbor navigational channel leading to the Port of Wilmington from 42 feet to 47 feet, has been included as part of the Water Resources Development Act of 2020, signed into law by former President Donald Trump on Dec. 27.

This step in the federal process is an important milestone for the future of N.C. Ports, the Port of Wilmington and the Wilmington Navigational Harbor, said Brian Clark, N.C. Ports executive director, in an email.

The Wilmington Harbor Navigation Improvement Project, should it gain future approvals, will serve as a catalyst for both the state and national economy, officials said.

Several East Coast ports, including in Georgia and Virginia, are looking to deepen their navigational channels to support the larger container vessels that are sailing across the globe.

N.C. Ports is already ushering into the Port of Wilmington these larger vessels, the most recent being the Yang Ming Warranty, a more than 14,000 twenty-foot equivalent unit (TEU) container vessel. But as these ships are getting larger, more depth is needed.

"Harbor enhancements are critical to our long-term success. These improvements will help to maintain the Port of Wilmington’s presence as a competitive global gateway by allowing deep-draft container ships to safely and efficiently reach the port," Clark said. "Additionally, it will solidify our position as a strategic port of call on the U.S. East Coast–Asia trade [line], which utilizes ultra-large container vessels."

But more work in the federal process has to take place before the project could reach the point of approvals and construction.

Appropriations are still needed before the project could be studied by the U.S. Army Corps of Engineers (USACE), and that could take a while, said Dave Connolly, chief public affairs officer for the USACE Wilmington District, in an email.

"The process for appropriations, report efforts (to include public engagement) and design efforts will take years," he said.

The next step would be to develop a report that "addresses the concerns of the Assistant Secretary of the Army for Civil Works, which included both economic and environmental concerns," Connolly said. "Specific guidance on the process going forward is still being developed."

Any report would be developed using 50% federal funds and 50% N.C. Ports funds, he said in an email.

The earliest the project could be placed in line for funding would be in the next budget cycle in October. Connolly, however, said he could not speculate which specific projects would get funded at that time.

The project will enhance infrastructure projects that have already been completed in recent years, he added.

"The neo-Panamax cranes, turning basin expansion, berth enhancements and air draft improvements were necessary projects to help pave the way for [ultra-large container vessels] to reach the Port of Wilmington," Clark said. "Now, we need the final piece of the puzzle, harbor enhancements, which will allow us to accommodate larger, deep-draft container vessels at the Port of Wilmington while keeping us competitive with ports up and down the East Coast."

"It has long been our mission to serve as an economic engine for North Carolina," Clark said, "and this project will enable us to further drive economic growth across our state."