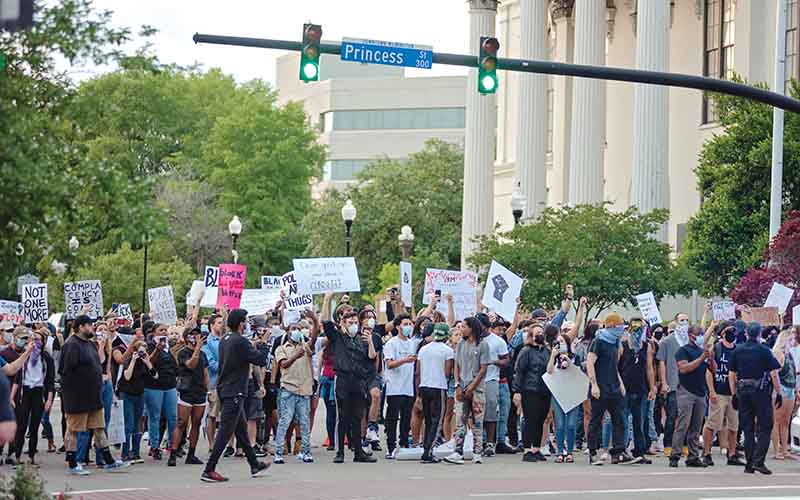 Prompted by the killing of George Floyd in Minneapolis, protesters took to the streets of downtown Wilmington earlier this year. (Photo by Michael Cline Spencer)
George Floyd’s killing in Min­neapolis on Memorial Day launched conversations about race relations across the country, in­cluding in Southeastern North Caroli­na.

On the heels of other high-profile cases of Black people killed this year, including Ahmaud Arbery and Breonna Taylor, Floyd’s death while in police custody sparked protests around the country. That included in downtown Wilmington, which at times over the months of daily protesting saw tense moments and use of tear gas from law enforcement, but largely avoided wide­spread property damage and violence that occurred in some other cities.

Williams said recently that the police department is undergoing an “internal cultural reset,” including items such as bringing in policing implicit bias train­ing; involving citizen panels to help select lieutenant and captain candidates for promotions; and partnering with the Georgetown University Law Center to implement project ABLE, or Active Bystandership for Law Enforcement, to train department personnel on ways to intervene if they see employees making mistakes such as officer misconduct.

“WPD is one of the first departments in the country to offer this program and the first in Southeastern North Caroli­na,” he said. “This type of training has been used for years in other industries but is new to law enforcement.”

Businesses nationally and locally responded with statements against rac­ism, and leaders pushed companies to examine their own organizations.

“I hear our businesses putting out statements left and right … but there’s an old cliché that I live my life by: ‘You must walk the talk,’” YWCA Lower Cape Fear CEO Velva Jenkins said in June, two weeks after Floyd’s killing and the start of the protests. “If we’re going to say it and put it in writ­ing, then we must do something.”

The events nationally did prompt some companies to seek out implicit bias training and look at the diversity of their hiring and promoting practices.

Others in Wilmington, which has its own complicated history on race and discussions around the 1898 massacre, are working to help grow the area’s base of minority business owners.

Backed by investment from Cas­tleBranch, Genesis Block launched this year to create programs to help minority- and women-owned business­es, including a searchable directory of Black-owned businesses in the region.

“Our goal is to have 1,000 of these companies by the end of 2021,” Girard Newkirk, who along with his wife, Tracey, co-founded Genesis Block, said about the Genesis List directory.