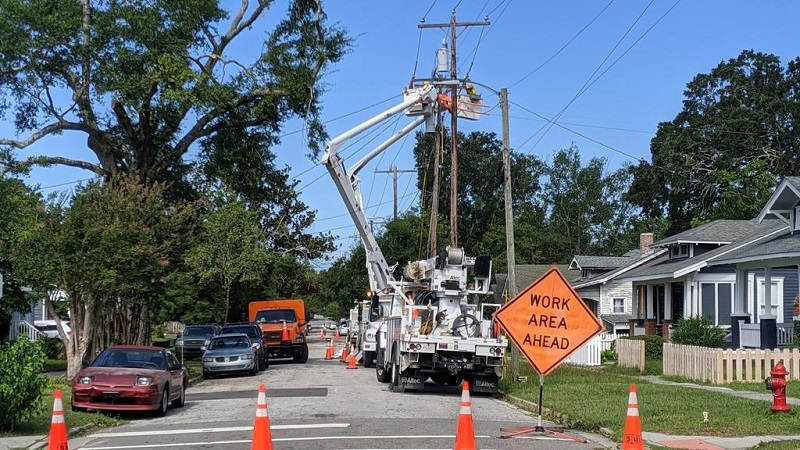 Duke Energy's power restoration crews working at crews restoring power at 17th and Orange streets near downtown Wilmington. (Photo courtesy of Duke Energy)
Hundreds of Duke Energy employees were working to restore power throughout the Cape Fear region in what has been called a multi-day effort in the wake of Hurricane Isaias, officials said Tuesday.

Jeff Brooks, Duke Energy spokesman, was out with restoration crews, including lineman and tree crews, on Middle Sound Loop road Tuesday, to follow the efforts in the Wilmington area.

"This is likely going to be a multi-day restoration for some customers," Brooks said at about 12:30 p.m. Tuesday. "How many of those customers, we're not quite sure yet because we've completed our damage assessments [and] we're putting together our estimated times of restoration, and that will give customers a little more insight into when their power will be restored. But we're certainly going to get as many back on today as we can."

There are about 2,000 lineworkers working across Eastern North Carolina, he said, adding that reinforcements have come in from the western part of the state, South Carolina and the Midwest to help with efforts in the east.

In the Cape Fear region specifically, Brooks said much of the damage from the storm was localized in the area, but progress was being made Tuesday afternoon.

"We restored about 30,000 or more customers in Wilmington and in New Hanover County since about 6:30 this morning. There's still about 65,000 customers remaining and about 125,000 statewide," Brooks said. "When you look at the numbers between New Hanover County, and Brunswick, Pender and Onslow [counties], that really accounts for about two-thirds of the outages in the whole state."

Power was restored Tuesday afternoon to the Port of Wilmington's north end, said Bethany Welch, spokeswoman for N.C. Ports. All traffic was being directed to the port's south gate area while the north end of the terminal was without power.

"Fortunately, both the Port of Wilmington and Port of Morehead City weathered the storm well," Welch said. "Our Storm Assessment teams surveyed both terminals early this morning and I am pleased to report no damage."

There was only some minor damage at the Wilmington International Airport (ILM), Julie Wilsey, airport director, said in an email Tuesday.

“I’m happy to report that the ILM Staff did an outstanding job preparing for the storm,” Wilsey said. “We maintained line power except for the airfield lighting, and it ran on back-up generator last night."

Airlines returned to normal operations around 8 a.m. Tuesday, Wilsey said. And construction crews with Montieth Construction, which is working on the last phase of ILM's $61 million terminal expansion project, were back on the job Tuesday as well, she added.

For Duke Energy, reinforcements were arriving throughout the day Tuesday, Brooks said.

As a result of the coronavirus pandemic, crews were being spread across different hotels, as well as other precautions being taken to ensure the safety of Duke Energy employees as they work on natural disaster response, he said.

Much work has been undertaken by Duke Energy since March to prepare for a response that took COVID-19 into account, he said.

"This is a different time; this is a pandemic time. And so there are some challenges to that work, " Brooks said. "We have to be very deliberate how we move crews into town in smaller groups, avoiding very large staging sites like you might typically see in a major hurricane. We have some staging sites, but they maybe not as large as they have been in the past ... We don't anticipate that that's going to cause us any significant delays in response. We still are making great progress. But it's just sort of the new reality that we live in and one that we have to think about when we plan our storm response."