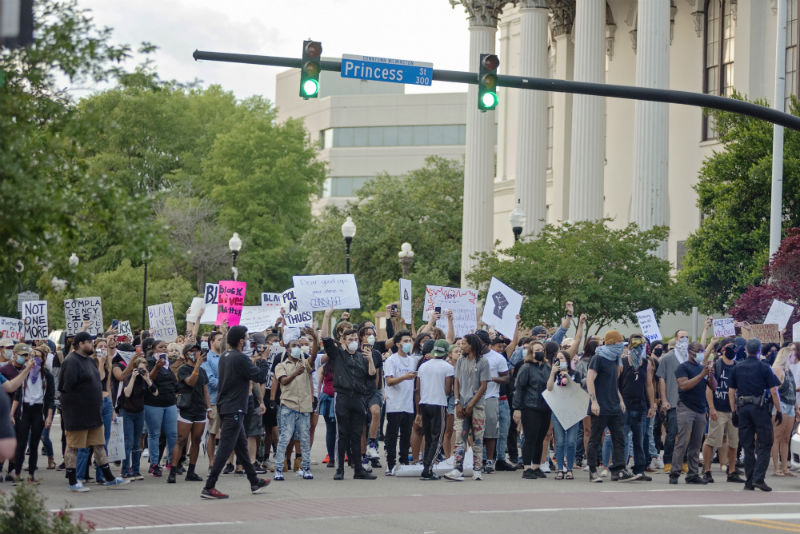 A crowd gathered Sunday afternoon in downtown Wilmington to protest the death of George Floyd, an unarmed African American man who was killed during an arrest in Minneapolis on May 25. (Photo by Michael Cline Spencer)

Ted Coughlin, CEO of Ironclad Brewery, worried Monday about what the repercussions might be for downtown Wilmington after Sunday evening's George Floyd protest that caused some damage.

Wilmington became another city in the U.S. to be touched by the protests, sparked by the death of George Floyd, an unarmed African American man, during an arrest in Minneapolis on May 25. The damage resulting from protests was much worse in larger cities across the nation and in North Carolina, including Raleigh.

During the protest in the Port City, someone broke a window at Coughlin’s Second Street business, which he had closed about two hours early, at 8 p.m. Sunday, because of the protest. Later, someone also broke windows at a few Castle Street businesses, said Terry Espy, president of the Downtown Business Alliance.

The protest came as downtown Wilmington businesses were beginning to reopen on a limited basis after the lifting of some coronavirus restrictions.

“I think the people who were like, ‘Hey let’s go downtown,’ after months of not going might change their minds,” Coughlin said Monday morning. “I think it’s going to further delay people coming unfortunately to downtown. But the strong police presence put together by local officials -- I really think it would have been far worse last night if it weren't for that.”

“As almost all of our businesses in downtown Wilmington are independently owned mom-and-pop shop," Wolverton said. "Coming out of the closures ... forced through the COVID-19 response, many businesses are economically fragile and significant damage could be a devastating blow and translates into less economic opportunity for everybody.”

"We need to ask a profound question, and that is why are we not on fire today and why aren't store windows broken out like so many other places in America that are dealing with this issue?" District Attorney Ben David said Monday.

He attributed it to two factors: the response of law enforcement Sunday night to disperse the crowd as tensions increased downtown and words of caution that some African American leaders circulated before the event.

"Established leaders in this community, African American leaders, counselors, pastors, heads of groups like the NAACP, National Black Caucus -- they all indicated that their legitimate grievances were not going to be represented by these protesters and they discouraged their members from attending," David said. "In other words, these protesters didn't represent them. That was a very important moment for the city."

David, who said he condemed the "killing of George Floyd in the strongest terms", said he recognized that people are upset right now.

"And there are things that we have to work on as a country and as a city," he added. "We don't run from our obligation to have serious conversations that really work towards meaningful change. But ... looting and rioting and arson and violence, that's not going to be part of the conversation."

A group gathered for a peaceful protest Saturday at the 1898 Memorial in downtown Wilmington. An organizer, Black Lives Matter’s local chapter, posted ahead of the Sunday evening protest that the event was not put on by them, a fact leaders of the New Hanover County NAACP and others shared with messages urging people not to attend.

“A lot of young people are expressing concern with me on Facebook about, ‘We need more than one event,’” Deborah Dicks Maxwell, president of the New Hanover County NAACP, said Monday. “Black Lives Matter, black leadership held an event Saturday. By having that second event that fueled the protests that turned into a mini riot, which had been proven all across the country had happened. So why try to do something that you knew was going to be possibly destructive?”

She said she has not heard of other protests planned, adding that NAACP chapter officials would talk about what comes next for a dialogue, adding that the group had been focusing recently on delivering supplies to seniors during the COVID-19 crisis.

“I want us to ride this out and still continue to be Wilmington,” she said, “because you know what volumes that will speak if we are able to keep this city intact while the rest of them have been pillaged and burned? That the city of 1898 did not succumb? That might be why people may want it to succumb.”

Vance Williams, with the local Black Lives Matter chapter, is convinced that supporters of both left- and right-leaning extremist groups were at Sunday’s event, including residents from outside the area. He said Monday that when he observed Sunday’s protest downtown, he asked several attending where they were from and got out-of-state responses.

Deputies with the New Hanover County Sheriff’s Office arrested nine people as a result of the protests on the same charges – failure to disperse on command and public disturbance, said spokesman Lt. Jerry Brewer.

When asked about whether there was any reason to believe the Sunday night protest was started by people who don’t live in the area, Brewer said, “All that’s part of the ongoing investigation.”

He said, “I can tell you the majority of the people we arrested were from Wilmington. I think all but two were Wilmington residents.”

Hayley Jensen, one of the owners of downtown Wilmington restaurant Beer Barrio, said some of the participants told her they were from Detroit.

Jensen said her North Front Street eatery’s hours were already modified to a closing of 8 p.m. and that helped with her protest response Sunday.

“We’ll continue with our modified hours, closing at 8 p.m.,” Jensen said when asked about preparations in case of more protests this week, along with one of the restaurant’s three owners being present each night “just to hold down the fort.”

At a regularly scheduled Monday morning session of the Wilmington City Council, Mayor Saffo said, “We thought that we could get by with a peaceful demonstration last night but obviously that wasn't in the cards and we had to do what we had to do as a community to protect our city, our community, our citizens, as well as property.”

Saffo also said, “Hopefully that'll be the end of it, but if it's not, we'll be prepared.”

The Wilmington Police Department did not make any of Sunday’s arrests, said Linda Thompson, spokeswoman for the city’s police department.

WDP's officers are on alert, she said.

"We are certainly monitoring any areas that we may think may be a problem as well as looking at social media to see what people may be planning. But we are monitoring the situation and we are going to be having individuals monitor areas for potential protests.

“We are not releasing what our plans are for safety reasons,” Thompson said, but "people can be reassured that we are keeping an eye on any potential protest in our area.”