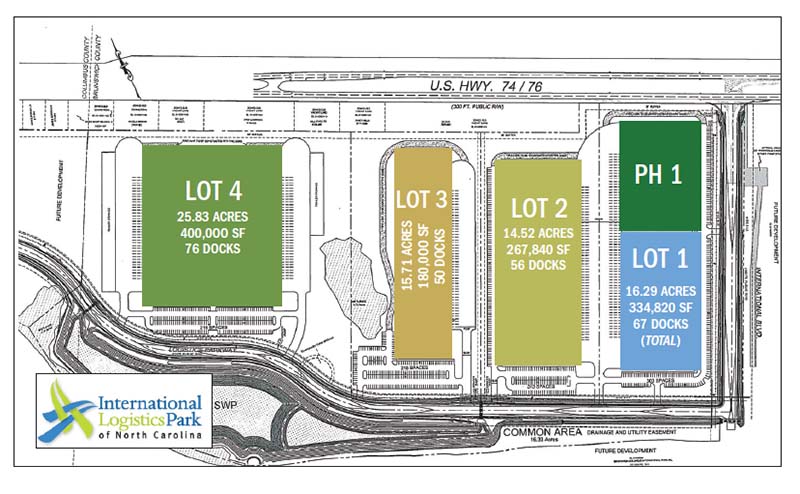 A conceptual plan for the International Logistics Park of North Carolina is pictured above. The rendering does not account for 7 acres of public area. (Image c/o Brunswick County)
Economic developers in Brunswick County are working to beef up the area’s industrial space to better compete for business prospects.

Their work is among several initiatives being undertaken by economic developers, private developers, real estate agents and local governments across the Wilmington area to address the need for more listings in the industrial segment. The effort is aimed at drawing new industry and jobs to the region, as well as providing potential room for the region’s existing industries to grow.

Some work that has taken place over the years to address that need is expected to come together this year.

In Brunswick County, economic developers want to aid the start of a speculative building development and facilitate the complete infrastructure to two megasites – the Mid-Atlantic Industrial Rail Park and International Logistics Park of North Carolina – by the year’s end.

“When I started with Brunswick BID, one of my tasks was to get Brunswick County better positioned to compete with better products. That included getting final infrastructure to [the] megasites, as well as identifying potential investors and partners for developing some spec buildings,” Early said. “We’re a lot closer than we have ever been before.”

Brunswick BID is currently talking with several firms and private investors that have experience in that type of development, Early said, adding, “We are in negotiations with them and hope that we will identify someone that will build some spec spaces.”

But developing such space takes time and a big investment, at least $6 million to $8 million, for a 150,000-square-foot building, Early said. He hopes, however, that construction could begin on a spec building in Brunswick County by the end of the year.

There are hundreds of acres of available for sale in the Leland Industrial Park.

In addition, efforts are ongoing to get water and sewer lines to the Mid-Atlantic and International Logistics park sites, which are more than 1,000 acres each, located off U.S. 74/76 near the Brunswick and Columbus county line.

It’s a project being undertaken by economic developers on both sides of the county line in coordination with their respective governments.

With the infrastructure getting closer to becoming a reality for the properties, a portion of the International Logistics site has been cleared for a better visual of the location, Early said.

That site is owned by Brunswick Columbus International Park Inc., a joint partnership with Brunswick and Columbus counties and private owners, Early said. The Mid-Atlantic site has multiple private owners.

Master plans have already been developed for both sites, Early said. Preliminary plans for a portion of the International Logistics Park site – a four-lot conceptual plan with more than 1.1 million square feet of space on 96 acres – was approved by the county planning board last month.

Developing spec buildings on available industrial land is an economic development tactic that is taking place across the region.

“We are at the beginning of the road with the Blue Clay Road site, and results will take time,” Satterfield said.

It took Pender Commerce Park, which is the model for New Hanover’s site, years to attract businesses, the first being in 2013, he said. Today, the park has four tenants, another on the way and a speculative building under development.

“What we see in the economic development world is that prospects across many different sectors are looking for a speed-to-market,” Satterfield said.

Progress continues as well by a development group toward adding a more than $8 million Class A industrial spec building, at more than 126,000 square feet, to the industrial park in Pender. Site work on the property was set to begin this week.

Another 150,000-square-foot Class A industrial building is being planned for somewhere in the Wilmington area by Raleigh-based Edgewater Ventures.

Class A industrial spaces help recruit a broad range of sectors, including manufacturing; warehouse and distribution; aviation; and food processing, among others, Satterfield said.

Also in New Hanover, offices under development such as Bradley Creek Station, which is expected to be completed this year, are “equally important” as it “allows us a better chance in pursuit of sectors such as fintech, CROs and corporate headquarters, for an example,” Satterfield said.

“Today, we are hearing from numerous clients that want to canvass existing buildings of scale,” he said. “Having options that haven’t historically been in our inventory is an essential step to landing more projects.”