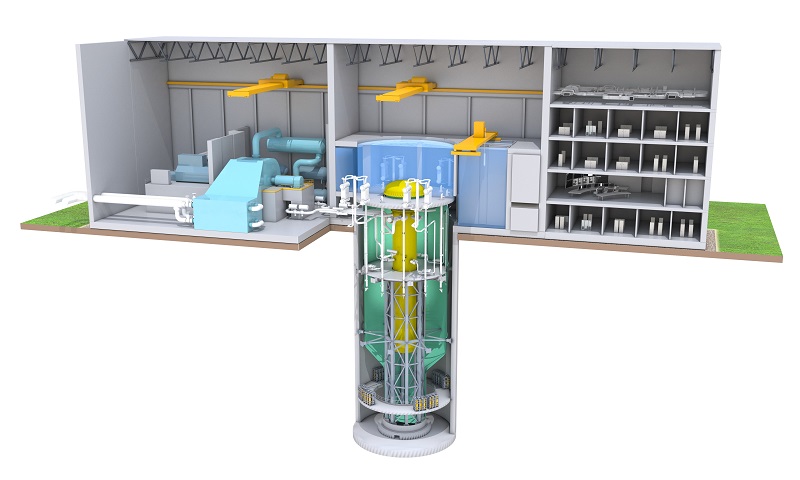 Company officials announced this week that its BWRX-300, a 300-megawatt electric (MWe) water-cooled natural circulation small modular reactor (SMR), could be built in the Czech Republic.

GE Hitachi has entered an agreement with CEZ a. s., an integrated electricity conglomerate, to examine the economic and technical feasibility of potentially constructing a BWRX-300 in the Czech Republic, officials said in a news release. GE Hitachi recently started the U.S. licensing process for the small modular reactor.

“This agreement is the latest example of the growing global interest in our breakthrough SMR technology,” Jon Ball, executive vice president of Nuclear Products for GE Hitachi, said in the release. “Because of our unique, design-to-cost approach, we believe the BWRX-300 is ideally positioned to help the Czech Republic meet a growing demand for affordable, clean, carbon-free energy.”

GE Hitachi has announced similar collaborations toward exploring the commercialization of the BWRX-300 in Estonia and Poland.

CEZ operates two nuclear power plants in the Czech Republic that generate about one-third of the country’s electricity, stated the release. Officials said the Czech government plan to substitute coal-powered plants with new nuclear builds and renewables in the future.

“As a company, we are focused on developing new energy solutions and technologies,” said Daniel Benes, CEZ CEO and chairman of the board, in the release. “We are already engaged with the development of small modular reactors, especially in our daughter company ÚJV Řež. The SMRs can be a significant alternative in the future that we cannot ignore. The collaboration with GE Hitachi is therefore a logical step for us.”

GE Hitachi, a global nuclear alliance created by GE and Hitachi, began the regulatory licensing process with the U.S. Nuclear Regulatory Commission (NRC) for the BWRX-300 at the end of last year.

If cleared by the NRC, it would be the first boiling water SMR licensed in the United States, according to a social media post by the U.S. Department of Energy’s Office of Nuclear Energy.

The company began the process Dec. 30 when it submitted the first of its licensing reports to the NRC.

“Embarking on the U.S. licensing process is a significant milestone in the commercialization of the BWRX-300,” said Ball in a news release.

The majority of the engineering work in support of the design and licensing efforts will take place in Wilmington, GE Hitachi spokesman Jon Allen said in a recent email.

“Fuel and potentially other reactor components would be manufactured here,” Allen said of the BWRX-300’s potential impact on the Wilmington-based site should the reactor reach the point of commercialization.

More work, however, is still to be done in the regulatory process with the NRC.

The BWRX-300 leverages the design and licensing basis of the firm's Economic Simplified Boiling Water Reactor (ESBWR), a 1,520 megawatt-electric boiling water reactor that was certified by the NRC in 2014, according to GE Hitachi. The SMR design is the 10th evolution of GE’s first Boiling Water Reactor (BWR) design.

The BWRX-300 is the simplest and most innovative of the BWR designs since GE began commercializing nuclear reactors in 1955, stated the release.