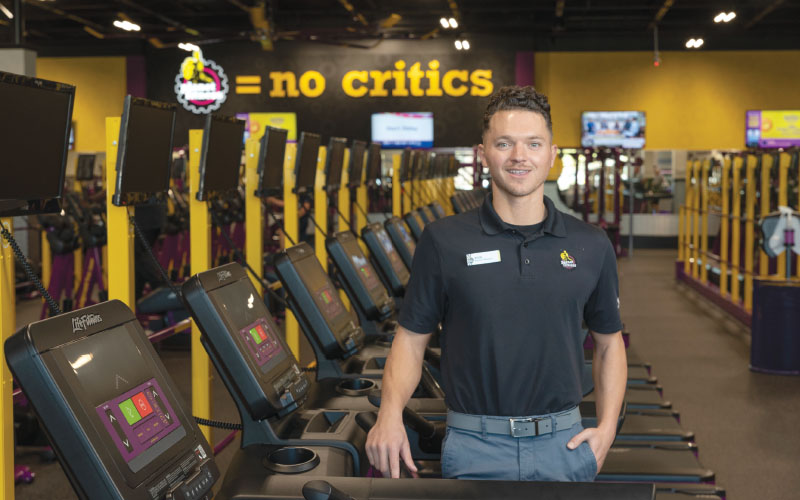 Reid Wolfe, regional manager for Planet Fitness locations in the area shown at the new Ogden facility, said wearable fitness technology is useful no matter what the user’s fitness level. (Photo by Michael Cline Spencer)
As it has done each year for the past 14, the American College of Sports Medicine (ACSM) recently released its top 20 fitness trends for this year based upon a worldwide survey.

Wearable technology tops the list as it did in 2016. The category includes fitness trackers, smartwatches, HR monitors and GPS tracking devices, according to an article by Walter M. Thompson in the November/ December issue of ACSM’s Health & Fitness Journal (FIT). The article states wearable technology is now a $95 billion industry.

“A lot of members and employees are wearing technology,” said Reid Wolfe, regional manager for local Planet Fitness locations. “They use it to track steps, their sleeping habits and general activity through the day.”

He noted that many are inexpensive and easy to use. Another advantage, he said, is their usefulness no matter the wearer’s fitness level. “It holds you accountable,” Wolfe said.

On the flip side, ACSM notes the use of apps is on the way out, something that Wolfe said he hasn’t seen in his three gyms.

“People are utilizing their phone apps to help them through workouts and to give them ideas and track their progress. Planet Fitness has an app for members to view hundreds of workout videos for the gym and at home,” Wolfe said.

Wolfe manages the three Planet Fitness gyms in New Hanover County owned by Anchor Management. Its third and newest location in the county, in the former Harris Teeter space at Ogden Plaza, had a soft opening at 11:30 p.m. on New Year’s Eve and plans a grand opening in early February.

Planet Fitness nationally was a sponsor of the Times Square ball drop, and Wolfe said the company thought it would be fun for members to celebrate together.

“We have over 20 TVs inside so they could watch the ball drop and be part of it,” he said.

It’s an example of the training needs Wolfe said come to mind first for him. “My initial reaction to the top trend is the desire for a more time-efficient workout,” he said.

While HIIT can be longer, many examples of commercial club packages are on the shorter end of the spectrum. For Planet Fitness members, two examples that incorporate HIIT and time efficiency are PF360 and TRX. Wolfe describes PF360 as a jungle gym for adults.

“Think of monkey bars with other things coming out of them. All sorts of stations attached to the actual machine. It has battle ropes, cable pulleys, medicine balls … endless options. About 10 people can be working out on it at the same time; it’s in its own room,” Wolfe said.

TRX incorporates straps anchored to an overhead rack. Either can be done with the aid of a trainer individually or with a group, or self-directed. “You’re getting the same workout in 20 minutes as some may get in an hour,” he said.

TRX is an example of bodyweight training, which is No. 7 on ACSM’s list.

The popularity of group classes continues as No. 3 on ACSM’s list, and pursual of local gym offerings testifies to the popularity of instructor- guided classes of all sorts.

Training with free weights is a new category, pulled from the earlier broad category of strength training, which debuted at No. 4 for ACSM. An important aspect of that category is the proper instruction of form and function, according to the FIT journal article.

While some gyms are geared more toward strength training, other area clubs such as Planet Fitness have a greater emphasis on cardio machines with a lighter emphasis on weights. “Nobody wants to wait for cardio which is why we have so much of it,” Wolfe said. “Everybody wants to use the resistance machines. We’re not trending toward the free weights. We focus on other areas of the gym.”

Wolfe pointed out that beyond the obvious physical benefit of exercise is the psychological, and that there are activities which enhance both. Massage, light therapy (aka infra-red sauna), hydromassage and other activities enhance the workout.

This also takes into account that people are taking better care of their skin, Wolfe said. Particularly important on the coast where skin cancer is a concern, that care should be part of a whole-body program.

He also believes people are moving toward fun exercises and away from using standard gym equipment. Where people might in previous years have done 30 minutes on a treadmill, he believes they’re splitting the time now by doing 10 on the treadmill and 20 to 30 in a circuit class; that combination gives cardio and strength training along with variety, he pointed out.

“People are more into trying new things,” he said.

Visit wilmingtonbiz.com for the American College of Sports Medicine’s top 20 fitness trends for 2020.