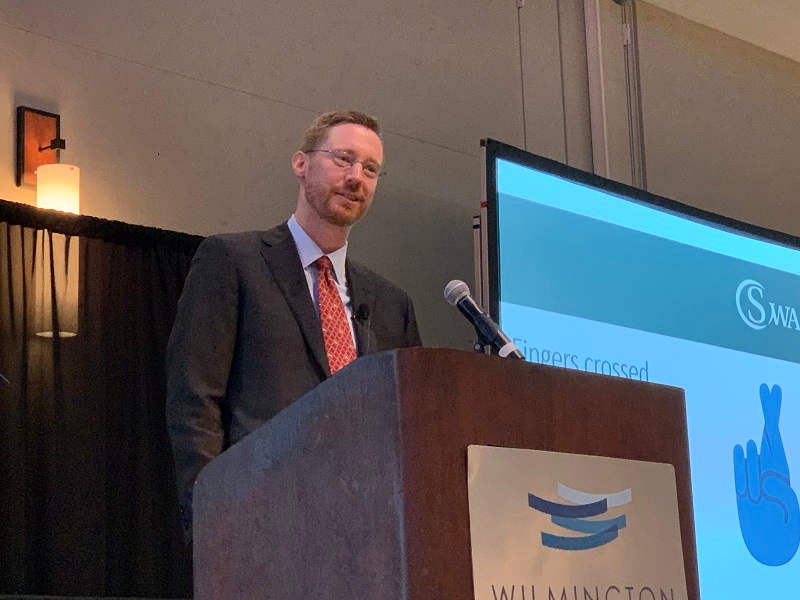 Jones presented the region's forecast along with a look back on the area economy over the past 10 years at the 28th annual Economic Forecast presented by RSM, the Wilmington Chamber of Commerce and Wilmington Business Development.

“It's been a heck of a run in Southeast North Carolina,” Jones told the crowd of more than 200 area professionals and local leaders who gathered for the event at the Wilmington Convention Center.

Based on the most current data, Jones said the region, over the past decade, has seen more than 25,000 homes built, welcomed 83,000 new residents, created more than 30,000 jobs, reduced unemployment by 6.9%, increased personal income by over $6 billion and produced more than $150 billion in value.

Meanwhile there were some causes to worry near the later half of 2019, caused by an inverted yield curve, a dip in consumer confidence at the national level and high levels of uncertainty surrounding trade, and unemployment rates locally were going up, he said.

More recently, however, consumer sentiment seems to be holding up well and people remain optimistic about the future, "which means there’s a high likelihood they're going to come visit us in Southeastern North Carolina this summer and hopefully leave some of their dollars with us,” Jones said.

Regional GDP growth is forecasted between 2.5% and 3% for 2020, outpacing the national forecast of around 2%, he said. The year 2019's measure, once finalized, is expected to be around 3%, due to shifting from Hurricane Florence, which hit the region in September 2018.

Jones said the region's economy is largely recovered from the storm, though there are still a few out there left to fully recover.

The future economic outlook is improving as national and regional uncertainty predicted over the course of 2019 lifts.

But while the forecast for 2020 may see some optimism, the region has some challenges looking well past the upcoming year, "as we see divergence within the region,” Jones said.

"New Hanover County is growing quicker than the surrounding counties and becoming more of the urban core of the region,” Jones said.

Whereas in Brunswick County, where there is a large retiree population, the economic output is sliding, he said.

That means Brunswick County is "especially exposed to fluctuations in dividend growth, transfer payments, more so than New Hanover County is,” Jones said.

“So this means we've got challenges in front of us going forward of how do we as a region manage these distinctly different areas and maybe even more importantly, how do we tie them together economically ... and that will be our challenge over the next decade,” Jones said.