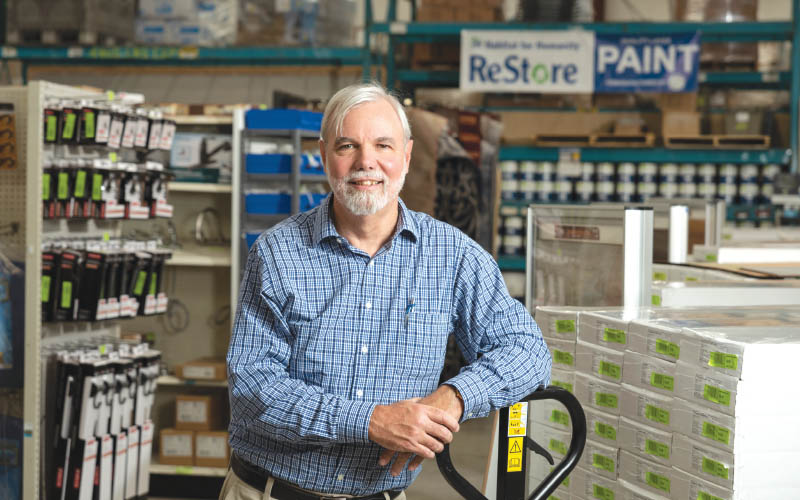 Steve Spain, shown in the new annex at Cape Fear Habitat for Humanity's ReStore in Ogden, has been the local Habitat organization's executive director for seven years. (Photo by Michael Cline Spencer)
Steve Spain has spent much of his professional life combating homelessness. Heading into his seventh year as executive director of Cape Fear Habitat for Humanity, he sees progress. Some of that progress, however, is because of devastation from Hurricane Florence in 2018.

“I have to give credit to Florence in helping us to expand what we’re doing,” Spain said. “The hurricane opened a lot of people’s eyes to just how serious the affordable housing shortage has been in our region. It opened some doors for funding that have allowed us to expand services for new houses and rebuilds.”

Spain believes recovery from the storm will take another five years. “It’s easy for people to forget if their own circumstances have improved. There are still thousands of houses damaged and thousands of people who don’t have a safe, affordable place to live. We see that as a big driver. We’ll be rebuilding houses damaged and looking for other solutions,” he said.

In a new neighborhood off Gordon Road, at least seven families who lost their homes to Florence will have new Habitat homes. The 27-home project on Daniel Boone Trail is expected to build out over the next two years. Infrastructure and land costs of more than $1.5 million were funded in part through the state’s disaster funding as well ascontributions from New Hanover Regional Medical Center, Wells Fargo Foundation and a private donor. “It’s been a real victory for the community that so many organizations have pulled together to fund this neighborhood,” he said.

Finding the money is critical, he said. Among the sources, he mentioned the governor’s office, local banks such as Wells Fargo, Bank of America and Live Oak Bank, and businesses such as New Hanover Regional Medical Center, which will start building its 10th sponsored house in December. Spain also noted that a lot of their homeowners are from the medical field, including NHRMC.

Spain spent more than 20 years working for Save the Children and the United Nations High Commissioner for Refugees in Pakistan and Afghanistan. Returning to the U.S., he earned a master’s in public administration from the John F. Kennedy School of Government at Harvard. “That’s when I switched from working with refugees to working with the homeless, which is sort of the same thing,” he said. Following a stint at the New England Center for Homeless Veterans, he moved to Wilmington as director of Wilmington Interfaith Hospitality Network, now called Family Promise. After eight years, he accepted the position at Habitat.

The local organization has morphed in its 32 years from an all-volunteer organization, which raised one house every two years, to a professionally staffed nonprofit business that will build two dozen houses in the current fiscal year.

One big recent change for the organization was adoption of a policy providing a minimum full-time wage of $12 (to increase to $12.75 in 2020) “to keep ahead of what it takes to be able to live in a Habitat house,” Spain said. To qualify to purchase a Habitat home, a wage floor of $12.38 is required.

Individuals and families apply to partner with Habitat for construction of a new home or to move into an existing house. They agree to put in sweat equity on their own home or someone else’s, 250 hours for a one-adult family and 400 hours for two adults. They must attend homeowner education classes and financial counseling. In return, Spain said, “We promise to get them into a house where the mortgage including insurance and taxes will not exceed 30% of their gross income.” Habitat serves as the bank with a 0% interest rate.

In addition to serving New Hanover County, Habitat serves Duplin and Pender, where housing may be in a rural setting. Individuals living in rural areas might qualify for a USDA mortgage at a very low rate, he said.

Currently, the organization has five houses under construction in New Hanover, two in Duplin and one in Pender. Spain said their work in Pender is increasing.

From application to move-in takes about a year, Spain said, but because of Hurricane Florence, they have an accelerated program for people who lost their housing. These cases can be accomplished in as little as three to four months. “When they move in, we do a lease to purchase so they have time to finish all of their responsibilities in the partnership, the sweat equity and education. Before they actually purchase, they will have completed all of these requirements,” Spain said.

Beginning with its original Re- Store on Third Street in downtown Wilmington, Cape Fear Habitat has expanded into downtown Burgaw and to Ogden, where it recently purchased the property holding its Market Street store after leasing it for eight years.

“The big expansion has been in the Ogden store, where we’ve taken over a warehouse that was behind it and turned it into a professional building supply store,” Spain said.

Again, Hurricane Florence came into play. “We had planned to do that before we knew about the hurricane, but it turned out to be excellent timing because there’s been a great need for all the things we sell. I feel bad, but we got lucky,” he said.

As with the other stores, most of the items in the stand-alone Ogden store are donated, while items in the warehouse are purchased for resale.

Spain says he’s learned much more than he ever thought he wanted to know about a lot of industries.

“It’s a lot of different hats,” he said. “We’re construction, retail, bank and social service agency, so we’ve got four different industries going on at once.”