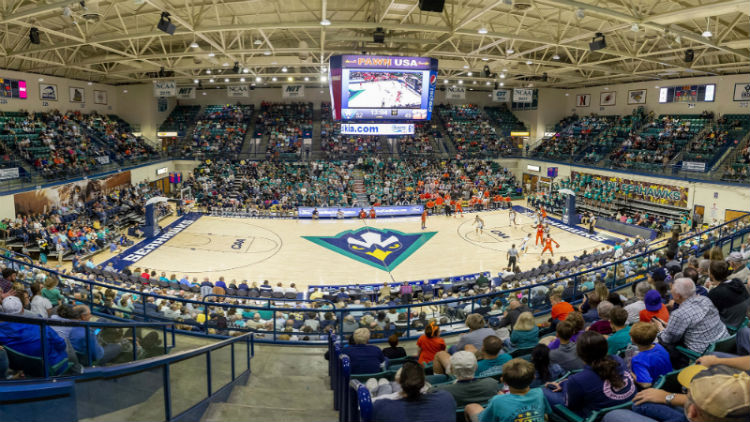 The sold-out UNCW men's basketball game against UNC on Friday at Trask Coliseum helps support all of UNCW's 19 intercollegiate teams. (Photo courtesy of UNCW)
After the University of North Carolina at Wilmington announced it had quickly sold out tickets for its men’s basketball game against Chapel Hill, UNCW officials hope fan support continues for all its intercollegiate teams.

When tickets for the UNCW vs. UNC at Chapel Hill men’s basketball game at Trask Coliseum went on sale Oct. 24 at 9 a.m., they were all gone by 9:17 a.m., Joe Browning, senior associate athletic director at UNCW, said in an email Tuesday.

“Attendance at games is difficult to predict and is determined by many factors, including the date, time, opponent, other activities in the area, and, yes, even the weather,” Browning said. “Friday marks the first time North Carolina has played men’s basketball at Trask Coliseum, so it’s an attractive event and very popular.”

UNCW has a student allotment of 1,200 tickets for each home game hosted at Trask Coliseum, a 5,200-seat venue.

With tickets sold out through the official UNCW athletics website, a few were available as of Tuesday afternoon on StubHub, a ticket exchange and resell website.

Browning said those StubHub prices are not common for UNCW basketball games.

Having a sell-out game is significant for the school, he said.

“From a revenue and spirit standpoint, it’s extremely important to support all of our teams and men’s and women’s basketball, in particular,” Browning said. “Ticket sales are a critical piece in generating revenue for our department and we rely on those funds to support all 19 of our intercollegiate teams.”

For those who could not get tickets for the much-anticipated game on Friday at 7 p.m., which is the second game of the regular season for the UNCW team, the game will be streamed by FloSports, the Colonial Athletic Association’s streaming partner.

The CAA entered into a $4.5 million agreement with FloSports earlier this year to allow the association’s games to be aired on its platform. A subscription is $12.50 a month or $95.88 per year.

This is the 56th sellout in the arena’s 43-year history, according to a news release. The last time a game was sold out was for a men’s basketball game against Hofstra in February 2018.

“We hope fans who couldn’t purchase tickets to Friday’s game will select another game to attend,” Browning said. “Our basketball games are a terrific entertainment value and provide great family fun for those of all ages.”