Economic Forecast Shows Some Uncertainty Ahead 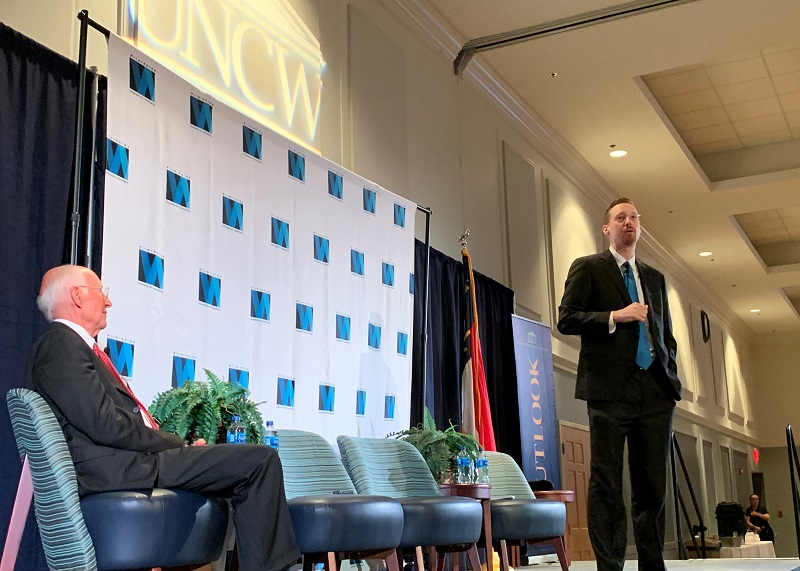 Local economists gave their regional and national forecasts during the 2019 Economic Outlook Conference at the University of North Carolina Wilmington. (Photo by Christina Haley O'Neal)

The economy, automation and globalization were among topics discussed at Thursday’s conference, which drew about 300 people, according to university officials.

Locally, economic times are good, but there is some uncertainty on the horizon, said Adam Jones, regional economist with UNCW’s Swain Center and an associate professor of economics at UNCW's Cameron School of Business.

The local economy has largely recovered from Hurricane Florence over a year ago, and that growth has been tapering down into a sustainable path, he said.

Estimates are at 2.5% GDP growth for 2018 for the Wilmington Metropolitan Statistical Area, which includes New Hanover and Pender counties. Projections for GDP in 2019 could finish at 1.9% growth and in 2020 at 1.6%, Jones said.

Unemployment rates have flattened out in the tri-county area over the past year and a half, he said, adding that the national rate has continued to drop and decline.

That is reflective of the about 9,000 people unemployed in New Hanover County, a number that has been consistent over the past three years, which indicates that employers are creating jobs at roughly the same pace as people are moving in, he said.

“We are continuing to create jobs. We are maintaining our unemployment rate. So what that means is that we are creating opportunities for folks to pursue their dream of living in Southeastern North Carolina. And as folks are moving here, there are opportunities for them. So, I think there's good news here,” Jones said.

Wage growth has been positive for new hires but not as strong for those staying in their jobs. The increasing wages for the job openings suggest the fight for talent is getting tougher and that could eventually trickle over to the people who stay with their employers, Jones said.

The uncertainty, however, remains as housing permits are sluggish, recreational good purchases are declining and political uncertainty is on the horizon affecting the expectations in businesses across the Carolinas, he said.

“I’m willing to call worry but not yet recession,” Jones said, adding that the good news is that the uncertainty is driven largely by politics and an election is approaching.

On a national level, there is no shortage of discussion on where the economy is headed, said Thomas Simpson, executive in residence at UNCW's Cameron School of Business.

“On the one hand, we hear that the economy has never been stronger and the outlook is even better. On the other hand, we were told that we can see a train wreck in sight,” Simpson said.

A feature of that economy today is sustainable growth, he said. GDP is low by historical standards, Simpson said, adding that it's on the order of 2% per year.

While some signs suggest that we are sliding into a recession, other models show that there is only a small probability that a recession is coming in the next year.

"I don't think the economy is losing its legs at all. I think the legs may not be quite as strong as they were before, but there's still enough to carry the economy on for the next few years," Simpson said.

As economists are predicting the future of the local and national economy remain sustainable, for now, three speakers Thursday touched on how to prepare for that future.

How the United States and China work together in the future will be important to local and national businesses, as well as how the future of the European Union plays out, said Joseph Quinlan, managing director and head of Marketing Strategy at Bank of America.

"I'm very optimistic about the global economy and future demand in and around women because they're going to be ... a huge driver of growth in the future," Quinlan said.

Nathan Snell, chief innovation officer for Wilmington-based nCino, focused on the topic of speed in business and looking at how technology and digital transformation in business can play a role.

"Digital transformation is really thinking about the services that you have today and what they would look like if you put them into a digital channel, whether it's mobile, whether it's a tablet, whether it's online, whether it's in some other sort of simple fashion ...," Snell said.

That also extends into how artificial intelligence will play a role in the future of modern technology, he said.

"There won't be, I would argue, in the next five to 10 years, any software that you can purchase or use in any way that doesn't have AI baked into it," Snell said.

The need for individuals and businesses to embrace globalization was highlighted by Abigail Dunne-Moses, senior faculty for the Center for Creative Leadership.

She encouraged those in the audience to develop their global mindset.

"One thing we know is this: globalization is here to stay ... now, what do you do with that when you come from Wilmington, North Carolina?" Dunne-Moses said.