What Lessons Did Florence Teach Us? 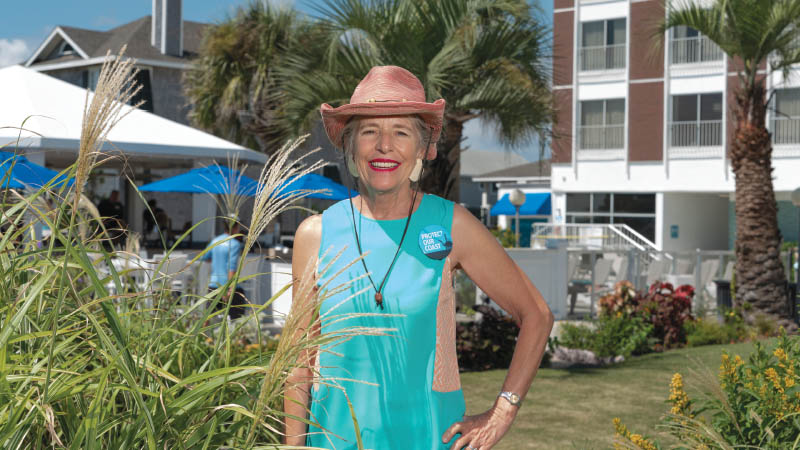 Mary Baggett-Martin, an owner of the Blockade Runner Beach Resort, is shown at the Wrightsville Beach hotel that like many area businesses was heavily damaged by Hurricane Florence. (Photo by Michael Cline Spencer)
As Hurricane Dorian gathered strength late last week and headed into a path that would take it up the Atlantic seaboard, it brought all-too-vivid memories of Hurricane Florence, which hit the Cape Fear area last September as Category 1 storm and hung around to cause major flooding.

In the intervening year, local governments and utilities have reviewed trouble spots and laid out plans to improve storm response.

Counties in the region, like their counterparts elsewhere in the state, formed or beefed up disaster response organizations to coordinate resources and volunteers.

Many of those updated response plans were teed up in preparation for Hurricane Dorian, which as of press time Sept. 3 threatened the coast and had residents and businesses implementing hard-learned lessons of nearly a year ago.

Ahead of Dorian, area business owners, local government officials and community groups discussed what they’ve learned in the year since Hurricane Florence made landfall near Wrightsville Beach.

In the past year, business owners and homeowners have worked hard to recover.

At the start of September 2018, the Blockade Runner Beach Resort was looking at its strongest September and October bookings in its 54 years in business. After Hurricane Florence’s visit two weeks later, all 12 of the property’s roofs had ripped off or been badly damaged, and many of the high-rise hotel’s walls and floors were ruined.

“Every element of the property was affected by the wind and 44 inches of rain,” said Mary Baggett-Martin, an owner of the Wrightsville Beach resort. “Ahead of the storm, we were worried about flooding, so we moved everything upstairs – computers, equipment – so all that got damaged when the roofs went.”

Fortunately for the Blockade Runner, it had good insurance and the help of a prominent property recovery company, and, Baggett-Martin said, a hard-working core of employees who did what needed to be done to restore basic operations. Still, a year later, she has a short to-do list of repairs and improvements.

The year since Hurricane Florence hit has been overflowing with lessons learned and tough work to do, as some neighborhoods struggle, numerous buildings wait for repair or demolition, and many businesses work to recover from the damage they sustained – and now, prepare for the potential impacts of another hurricane season.

Damage to the business’s facilities and equipment may be only one factor in forcing it to go under, she explained. Others include loss of inventory and having to dip into savings to keep staff members or risking losing staff. 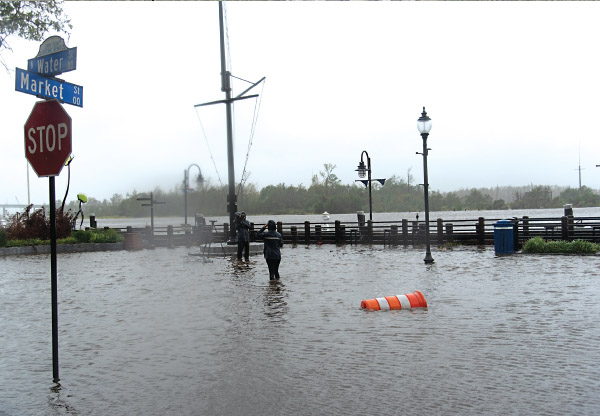 The Blockade Runner owners decided to take advantage of the rebuild to make some improvements to the property. They worked with the roofer to better slope each surface toward the roof drains, and they assessed those drains to make sure they had adequate capacity.
In replacing walls in the guest rooms, the team added more insulation.

The cork flooring on the ground level was ruined, so the owners decided to replace it with concrete and employed a muralist to paint designs on the lobby floor as well as on the walls.

In fact, Baggett-Martin said, the multi-million-dollar hotel rehab gave the owners an opportunity to rethink décor, guest comfort and even services.

As the resort was gradually repaired and remodeled, it was able to open up guest rooms incrementally, bringing back more staff and boosting revenues to help finance additional work. That was important, Baggett-Martin said.

“Staff is the biggest loss,” she said. “We were able to keep our salaried staff going [during the closure], along with key maintenance people who agreed to come in and do whatever needed to be done.”

It’s easy to see the transformation of the Blockade Runner, but many of the projects undertaken by businesses, institutions and local governments since the 2018 storm are less visible.

Cape Fear Public Utility Authority, for example, has made fuel access a priority, after post-Florence flooding and electrical outages had a crippling effect on basic services.

“Fuel was a problem for us during this last storm,” said Eric Hatcher, the authority’s security and emergency manager. “We had emergency fuel contracts in place, but when the whole county lost power, we could not pump gas into our trucks. And some of those fuel companies’ employees evacuated. And the roads were unsafe. So there was fuel, but it could not be delivered or pumped. We learned that we have to understand [in advance] what our contractors’ plans are.”

As a result of its experience during and after the hurricane, CFPUA purchased its own fuel truck, trained and licensed personnel to drive it and secured certifications and HAZMAT clearance. This way, Hatcher said, if a fuel vendor cannot deliver needed supplies during an emergency, CFPUA can send its own truck and crew.

The utility also increased its fuel storage capacity with the purchase and lease of more tanks, which it has placed at its water treatment plants, in part to extend the run time of its generators.

CFPUA’s other priority is to increase its staffing levels during emergencies such as hurricanes and ice storms. This necessitates housing staff at the plants for as long as emergency conditions last and having them work in shifts. As a result, food preparation equipment, sleeping accommodations and sanitary facilities at the wastewater treatment and drinking water plants have been improved, Hatcher said.

Many residents and businesses in Pender County are still facing major replacement and restoration work. The county annex in Hampstead sustained damage, but repairs are almost finished, according to Kyle Breuer, the county’s planning director. The county courthouse, however, has yet to be restored.

Pender, like Brunswick and New Hanover counties, is in line to receive some FEMA Hazard Mitigation Grant Program funds to help them reduce or eliminate long-term risks to people and property from future disasters. New Hanover has been approved for $2.2 million to address 11 structures; Brunswick will receive $1.2 million for five. To date, according to Breuer, 25 properties in Pender County have been approved for an expedited acquisition program funded by an HMGP grant of $4.9 million.

While some property owners who can afford to do so are already taking steps to raise their homes above current code minimums, many others need financial help to protect their property, said Breuer, who explained this part of the Hazard Mitigation Grant program revolves around either elevating structures or buying them out and relocating families to new homes built on higher ground.

“Then we are going back to the HMGP and submitting a request for quite a few more – in the 100 to 200 range – for additional elevation and acquisition projects. Our total grant application was sent to the state last December.”

The county has applied for HMGP funds to install a radio transmitter and to provide high-capacity generators to schools that are used as emergency shelters.

On the heels of the hurricane, Pender County officials committed to developing a resilience plan to identify existing conditions, economic trends, land-use and environmental conditions related to hazards and disaster preparedness, Breuer said.

The plan also lays out goals related to hazard risk reduction and preparedness, with action items linked to the goals, and identification of potential funding sources to support the action items. Breuer said the plan would also generate some policies and specific strategies the county can follow to increase its resilience to future natural disasters.

“Florence taught us a lot,” said Steven Still, New Hanover’s emergency management director. “The severity of the winds plus the rain is something we have not seen in a long time. Complacency was an issue. A lot of new folks have moved here since the last serious hurricane, and they thought a Category 1 was not going to be a big deal.

“This has been a total rebuilding year in terms of our processes and our facilities,” he continued. “There have been no giant steps, just a lot of incremental improvements. There has been a lot of discussion about [county] facilities.”

One priority, Still said, is to identify schools to be used as shelters in future emergencies and to better equip them.

“So many schools were damaged – many built in the ’70s and ’80s before there was categorization of storms. The newer schools were built with storm categories in mind,” he said.

Some of those newer schools, like the new Blair Elementary School on Market Street, are built to serve as shelters, with more ADA-compliant features, bigger generators and sanitary facilities such as showers, so the county won’t have to equip them when disaster looms.

While Pender County Schools had to replace a few roofs, do patchwork repairs and mold remediation for some of its schools, improving communications systems was a priority for the district, according to schools spokesman Alex Riley. Since the storm, the district has gotten an expedited grant to purchase new computer servers and install a new generator to replace one that Riley said could date to World War II days.

In a disaster situation, it’s essential for the school system to get information out to students and parents, and to the general public, since several of the schools serve as shelters, he said.

One intangible need in preparing for and surviving a disaster is good communication. Hart, whose coalition (newhanoverdisastercoalition.org) now consists of nearly 80 organizations whose work relates to disaster prevention and recovery, said it’s challenging to figure out how to get information out to the public and to businesses.

“FEMA has some really good tool kits, and getting tool kits out is something I’m working on,” she said. “But I’m still figuring out resources, and I’m working full time on this and on getting information out to small business owners.”