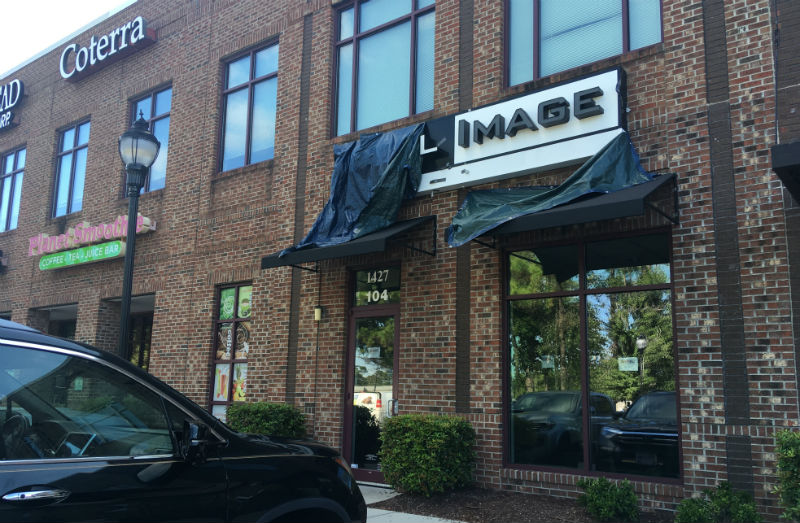 An Ideal Image sign coming down at 1427 Military Cutoff Road where Revival Laser and Skin Clinic will take over and open on Monday. (Photo by Johanna Cano)
Revival Laser and Skin Clinic is scheduled to open Monday in Wilmington after Jason Fosdick, also known as Foz from "Foz in the Morning" radio show on WAZO-FM, purchased the previous Ideal Image operation and rebranded it.

Fosdick said he decided to buy Ideal Image, 1427 Military Cutoff Road, because it was a good business that he has worked with in the past.

“I really loved working with Ideal Image,” Fosdick said. “I had the option to buy it; the owner [Allen Meglin] wanted to retire. He was done with the hustle and bustle.”

Fosdick purchased the business Aug. 8. He did not disclose the purchase price.

Revival will offer similar services as Ideal Image including laser hair removal, which Fosdick said is popular, as well as other cosmetic services including injectables such as Botox and Juvederm.

The clinic will also provide new services not previously offered, which are still in the works, he said.

What makes this new clinic different is that he was able to cut prices, Fosdick said.

“Since we are no longer Ideal Image, we are able to come in and slash a lot of the prices and make it super affordable for everybody,” he said.

The new clinic has new management, including five workers, and it underwent remodeling including new paint, carpet and other interior changes.

Another new item Fosdick said he will implement is a limited subscription-based plan where clients can receive full body laser treatments for life after paying $150 a month for two years.

After the opening Monday, all services will have grand-opening rates for at least two weeks.

While Fosdick has purchased the business, he said he will not be the face of the company, but rather, will help with marketing and running the back end while continuing to work on his morning radio show.